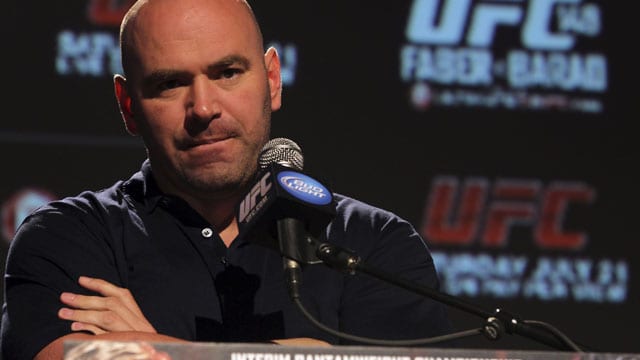 It looks like Daniel Cormier’s days as champion in the light heavyweight division are numbered. Dana White has clarified his future vision of the 205-pound weight class and “DC” is nowhere to be found.

Double-champ Cormier has been sidelined since winning the heavyweight title back at UFC 226 in July over then champion Stipe Miocic. Cormier broke his hand in the fight, adding to his lengthy history of broken hands.

Further complicating matters the UFC has been urging “DC” to relinquish the title in hopes of booking the newly reinstated Jon Jones vs. anyone. Cormier, however, seems focused on defending his heavyweight title against the returning Brock Lesnar.

How White Sees It

Unfortunately for Cormier, White believes the time is coming when the UFC will have to strip “DC” of the 205-pound strap.

“Cormier is hurt right now, said on the “UFC Unfiltered” podcast. “He broke his hand in the Stipe [Miocic] fight. So when they’re in these types of situations, much like the Conor [McGregor] situation and others that it’s happened to, Georges St-Pierre, whoever, Cormier by tying up two belts is going to have to give up one of the belts.”

White isn’t opposed to a third Cormier vs. Jones fight, however, he wants that fight to take place in the heavyweight division. Cormier insists he wants to finish the trilogy with Jones where it started – at 205 pounds.

“[Cormier] wants to fight Jon Jones and beat Jon Jones at 205 [pounds],” White revealed. “Not that that’s going to happen, but that’s what he wants in a perfect world. I would obviously rather see them fight at heavyweight, but I really don’t know if Jon Jones wants to move up to heavyweight. It really hasn’t played out yet.”

White had hoped to announce Jones vs. Gustafsson for the light heavyweight title as the main event for UFC 232 on Dec. 29 in Las Vegas.

That fight is definitely worthy of such accolades, but with Cormier unwilling to play ball, the future of the light heavyweight division is very much up in the air.