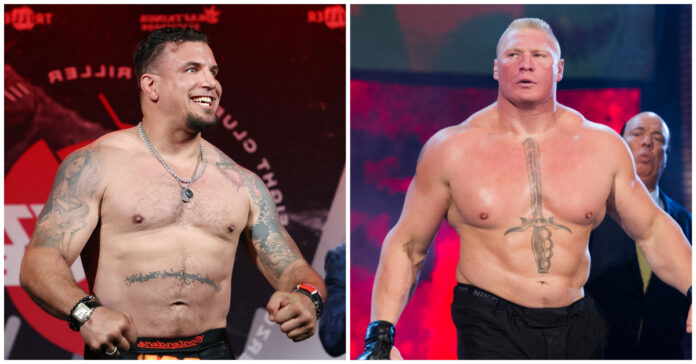 Frank Mir is open to the idea of a rubber match with Brock Lesnar.

Former two-time UFC heavyweight champion Frank Mir took on Brock Lesnar for the first time at UFC 81. Lesnar, who came through from the WWE, had only fought once professionally as a mixed martial artist against Min Soo Kim at K-1. Following his debut win in the sport, Lesnar would be picked up by the UFC for a showdown against Mir.

Lesnar would be handily dispatched by Mir within 90 seconds with a kneebar submission. The pro wrestling superstar turned his fortunes around to go on a four-fight win streak that included a rematch against Mir, with Lesnar knocking him out in the second round at UFC 100.

Frank Mir is down to have the Brock Lesnar trilogy fight

In an appearance on Insight with Chris Van Vliet, Frank Mir shared his thoughts on a potential third fight with Lesnar.

“I wanted to put myself in a position by going out there and being successful at it, but it was one of those things where it wasn’t even in the talks,” Mir said. “I would be game [for a third MMA fight]. No [it was never close to happening]. Not on his radar, I guess. Just not that he wanted to do it. When you’re the A-side, he’s a draw money-wise, he gets to make more of the calls.

“From what I was told, because of the way I responded after the second fight, he truly felt that I was a little off. I think in Lesnar’s mind, how could you want to fight me again? People don’t [want to see it], so there’s something wrong with [me] that I think made him uneasy.” (ht MMA Fighting)

Mir claims that Lesnar does the “bare minimum”

Following his four-fight win streak, Lesnar would go on to drop two in a row. He fought one more time after that, taking on Mark Hunt at UFC 200. Although he defeated Hunt via unanimous decision, the result was overturned to a no-contest after he tested positive for clomiphene.

Mir claims that Lesnar doesn’t put all his efforts in and tries to get by doing as little as possible.

“I don’t know much about his pro wrestling, I don’t watch that often so I don’t know how bad he is at [promos],” Mir said. “But I think he’s definitely a guy, from what I understand and talking to other people in the industry, he does the bare minimum of what he has to do to cash a check and I don’t fault him for that.

“We all gotta make money and I think he’s more naturally a fighter than he is a pro wrestler and so I think it’s not his first love but financially it pays better and obviously, he can continue to do it for a lot longer.”

Do you want to see Frank Mir fight Brock Lesnar for the third time?