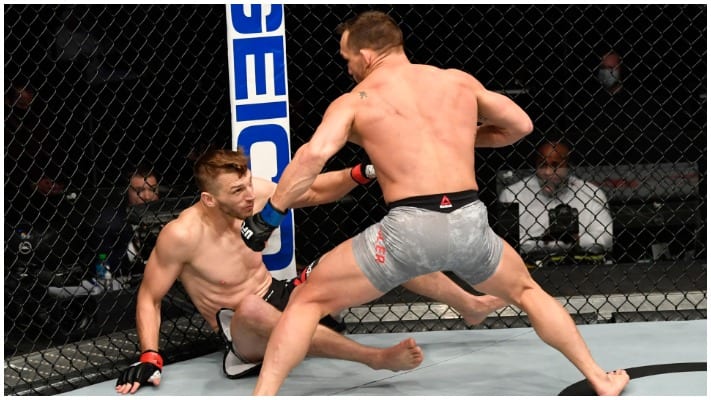 Dan Hooker has spoken out for the first time since suffering a first-round knockout loss against Michael Chandler at UFC 257 on January 23.

Hooker was the favourite heading into his co-main event match-up with the UFC newbie. On the night things did no to go plan for the New Zealander at all.

Chandler dictated the early moments of the fight with body attacks. The former Bellator champion eventually came over the top with one of his punches and flattened Hooker. He landed some follow up shots before the referee mercifully waved off the fight.

In an interview with Submission Radio, Hooker reflected on the defeat.

“You invest so much into this sport,” Hooker added. “You invest so much. Like, you prepare for a bad case, but that’s like a whole other level. That’s the first time that that’s ever happened to me in my career, to not only lose, but to lose in that kind of fashion. But you’re out back and you’re fine. Like, you go back to the hotel, I was completely fine. You don’t even feel like you’ve been in a fight. At least if you go out there, you fight your heart out, you get busted up, someone gets the better of you, but you know you tried. You went out on your shield, you tried, you fought hard. That’s a lot easier to take, because you went out there. I didn’t even feel like I got in a fight. We arrived back in the hotel, I was like, was that? You’re more thinking, is that a bad dream? You’re just in like more of a bad dream case scenario.”

Post-fight Hooker left his gloves in the Octagon suggesting he was done fighting. However, after having some time to cool down the 30-year-old has decided to fight on.

“You’re always frustrated after a loss,” Hooker said. “Yeah, like, a balance of everything. Like, of sheer frustration, you’re disappointed. And then you get back to the hotel. In that moment, I was like, ‘I’m done. I’m finished with this shitty sport. I’m done.’ And then you get back to the hotel and you sit down and think about it, and you realize you’re not good at anything else either (laughs). I was kind of thinking, shit, I’ve kind of painted myself into a bit of a corner here (laughs).”

Who do you want to see Dan Hooker fight next?