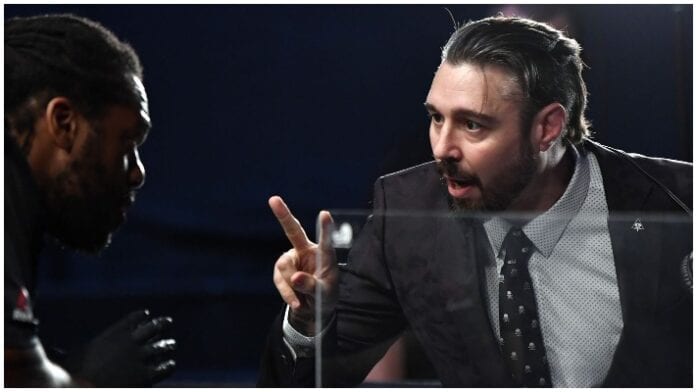 Dan Hardy is tired of hearing how great of a referee Herb Dean is.

The former UFC title challenger and commentator has a history with Dean going back to UFC on ESPN 14 this past July. In a fight between Jai Herbert and Francisco Trinaldo, Herbert was hurt badly and dropped by an overhand right. Despite this, Dean allowed the fight to continue and essentially forced Trinaldo to land a number of seemingly unnecessary shots. Hardy was calling the fight, and could be heard yelling at Dean to stop the fight. This led to an altercation between the two after the fight which drew the ire of UFC president Dana White.

Now, Hardy finds himself outside of the UFC while Dean continues to oversee some of the biggest fights in the organization. Hardy has said that a disagreement with a UFC employee led to his departure, but many believe the public argument between him and Dean caused an irreparable rift between him and the UFC. In an interview with Submission Radio, Hardy said he doesn’t understand why his mistake cost him his job while Dean continues to make mistakes “almost on a weekly basis” without repercussions (H/T BloodyElbow).

“So, I’m the ‘stop the fight’ guy. I don’t know if I can swear on your show, but f*ck it, I don’t care, because I’m speaking out for something that’s important,” Hardy said. “And it’s like this weird misinformation that’s happened about it, where I’m like there picking a fight for some kind of personal benefit. It’s just f*cking nonsense. Like, what a stupid thing to say.

“Like, I don’t really know Jai Herbert. I know him as well as I know Trinaldo,” Hardy said. “It doesn’t matter if the situation was reversed, it’d be the same situation. And it’s not about Herb, but like, generally we have mistakes made consistently in the sport…

“I mean, you can see now I can speak, so I can say exactly what I like, I don’t get it,” Hardy continued. “Like, he’s working the majority of the events in Las Vegas, he’s considered the gold standard of the sport, but he makes a mistake almost on a weekly basis at this point. Like, who’s gonna call him out on it? I’ll do it. I don’t care.”

Dean has yet to respond to Hardy’s accusations. However, if Hardy is concerned about what he believes are misconceptions White has about the altercation, perhaps he would be better off letting things go? Just some food for thought.

Do you agree with Dan Hardy that Herb Dean makes too many mistakes? Let us know!