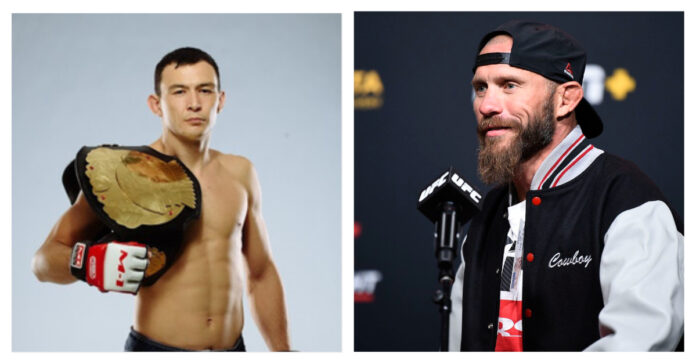 The highly anticipated bout between the two rising lightweights did not disappoint as it was a back-and-forth contest, with Ismagulov forced to rally in the fight’s second half to pull out the win. Afterward, Ismagulov took the mic to call out Donald Cerrone.

Ismagulov even added a tongue-in-cheek comment saying to give him an hour and he’ll fight Cerrone right after, which got a few laughs from the media.

Of course, Donald ‘Cowboy’ Cerrone was set to be the co-main event for the Austin card, again Joe Lauzon. However, Lauzon was forced to pull out of the event due to a knee injury following the weigh-in on Friday. This isn’t the first time the two were matched to compete as Lauzon and Cerrone were set to fight at UFC 274, but that time, it was Cerrone who had to pull out of the bout as he fell ill after the weigh-ins.

UFC president, Dana White, stated at the post-fight press conference that he does not intend to book Lauzon and Cerrone for the 3rd time, comparing it to the cursed Tony Ferguson and Khabib Nurmagomedov situation, which famously fell through on five different occasions.

This may open up a path for Damir Ismagulov to match up with the aging legend in Cowboy. Cerrone has lost 5 of his last 6 fights, with one of them being a no-contest. The last win on Cerrone’s record goes as far back as 2019 when he defeated Al Iaquinta.

Meanwhile, Damir Ismagulov is riding a 19-fight win streak, including a 5-fight UFC win streak. So, if a bout between Ismagulov and Cerrone were to come about, there is no doubt Ismagulov would be the heavy favorite. Although currently unranked, Ismagulov should see a number beside his name sooner than later, especially after the gutsy win over Kutateladze.