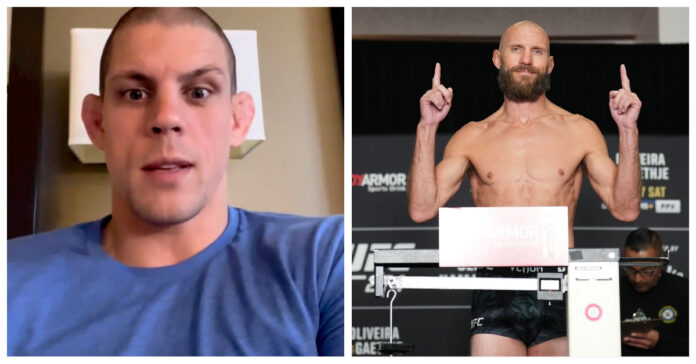 This past Saturday, Joe Lauzon was forced to withdraw from his planned outing with Donald Cerrone due to health issues. Lauzon was visibly absent from the ceremonial weigh-ins although he had made weight in the official ones. The 38-year-old was dealing with cramps and later revealed he couldn’t move his leg.

The contest between the two grizzled veterans was called off in what can be considered a sacrifice to the MMA gods based on the firecracker of a card that fans got barring that one fight.

It marked the second time their bout had been canceled on fight day. The pair were supposed to compete last month at UFC 274 but the matchup was written off after Cerrone got food poisoning on the day of the event.

In a bizarre turn of events, Joe Lauzon would later reveal on his Instagram that the knee injury he suffered had suddenly recovered after watching a video someone sent him.

“So you can’t make this up, but my knee works again,” Lauzon said. “Someone sent me a video maybe an hour ago on Instagram about like, ‘This sounds like something I deal with with my knee. You should check out this video.’ And it was 100 percent, everything was exactly the problem I was having.

“It was called a ‘tib-fib dislocation.’ So basically the bones in my leg were dislocated. That’s why we couldn’t get it back. So I did the exercise in the video and it popped back in. It’s insane. My leg fully works. I’m able to hop, walk, jump.

“I literally could not put socks on, I couldn’t lift my foot off the bed, I couldn’t stand, I couldn’t put any weight on it, I couldn’t do anything the last day and a half. I had to try and hobble and I couldn’t even hop on one foot because I couldn’t take my foot shaking. It was horrible.” (h/t MMAFighting.com)

UFC President Dana White told reporters that he has no plans to make the fight happen again. He referred to the failed attempts at putting together Khabib Nurmagomedov vs. Tony Ferguson but did not reveal what’s next for the two seasoned professionals.

Do you want to see Joe Lauzon being booked against Donald Cerrone for a third time?