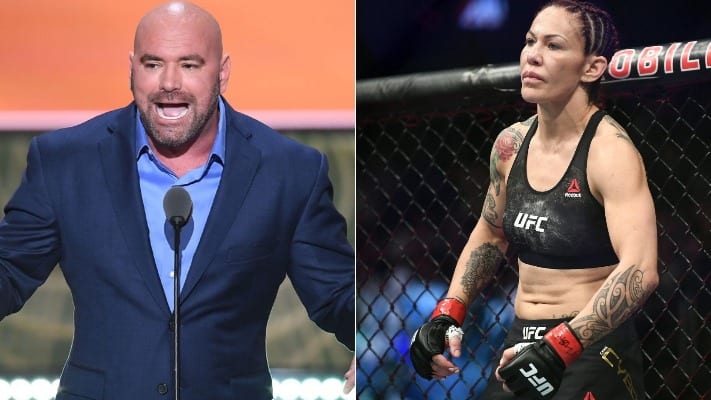 In recent weeks, Cyborg and White have said conflicting things about whether she wanted a rematch with Amanda Nunes or not. Cyborg has been adamant about a rematch, while White has repeatedly claimed she’s turned it down and is afraid of losing.

The former featherweight champion recently accused White of being a liar and damaging her brand. And following her UFC 240 win over Felicia Spencer this past weekend — the last on her deal — she wants an apology from the head honcho for everything he’s done to her in the past:

“I’m willing to make a [new UFC] deal but Dana White should say ‘I’m sorry’ for everything he’s done to me,” Cyborg said on Ariel Helwani’s MMA Show on Monday. “I suffered bullying and boos. Go on my Instagram, people say ‘I’m a man, I have a dick’ because of the joke he’s doing. He did the joke about [how] I look like Wanderlei Silva with a dress.

“Where is the code? He’s the boss. How is the boss making fun of your athlete, a girl? Saying she has a penis, she’s a guy. [You] have to have the rules… He has to pay for what he’s doing. He’s damaged my brand, my self-esteem.”

Cyborg added there if there was any chance of re-signing with the UFC, she would need an apology from White:

“Of course, he has to apologize,” she added. “He has [a] family, he has kids. He’s supposed to do this. I don’t know if he has a heart but what he’s doing has not just touched [affected] me, it’s touched people around me, my family. It’s not right.”

And she’s only going to accept a public apology too:

She would later post a video showing White and Rogan’s comments about her:

But even if she does get apologies from both of them, it doesn’t necessarily guarantee her signing a new UFC deal — she also revealed she still plans on testing free agency.

What do you make of the entire situation?