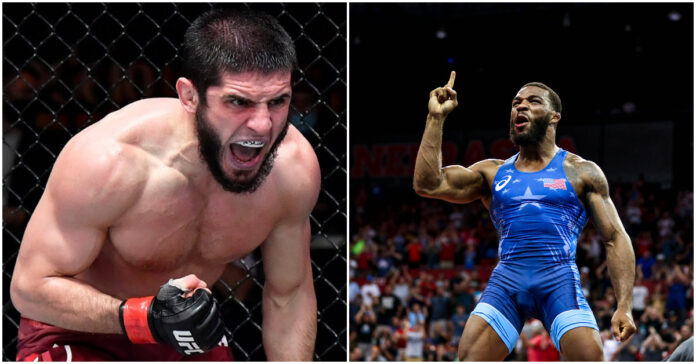 Rising UFC star Islam Makhachev is so confident in his wrestling abilities that he asked Daniel Cormier to bring in five-time wrestling world champion Jordan Burroughs for a grappling match.

After the retirement of former UFC lightweight champion Khabib Nurmagomedov, many saw Islam Makhachev as his next successor in line with the latter receiving the same praise from the MMA legend himself. Daniel Cormier is a teammate of both Nurmagomedov and Makhachev as they all train at AKA. Given his role at the gym and his close bond with the Dagestani fighter, he has a good insight into what goes on behind the scenes.

In a recent interview with MMA Fighting, Daniel Cormier revealed that Islam Makhachev asked him to bring in Jordan Burroughs as he was so sure of his abilities that he believed Burroughs to be a good match-up for him.

Islam Makhachev has stated his desire to test himself against the best as he remains strong on an incredible ten-fight win streak after his only loss to Adriano Martins at UFC 192. Makhachev shared his thoughts on how a potential wrestling match would go between him and Jordan Burroughs if it happened at AKA.

Burroughs caught wind of the video clip and responded via a tweet asking the combat sambo world champion to prove his conviction.

Makhachev reinforced his confidence in wrestling Burroughs in a video posted to Nurmagomedov’s official YouTube channel ahead of UFC 272.

Burroughs has given mixed signals when it comes to competing in MMA. He explained that while he’s a big fan of the sport, he does not see himself competing in it due to the potential downside of a loss. MMA is a different beast than wrestling and a loss can mean long-term damage to one’s health whereas the likelihood of the same level of damage being taken in wrestling is very low.

In October last year, the decorated wrestler might have had a change of heart as he stated his wish to have a fight in MMA. No signings or reports of any ongoing talks between the wrestler and MMA promotions have come out yet.

Do you think Islam Makhachev will beat Jordan Burroughs in a wrestling match?