LowKickMMA.com
Home UFC News Conor McGregor will not fight until 2023 according to manager: ‘He’s still... 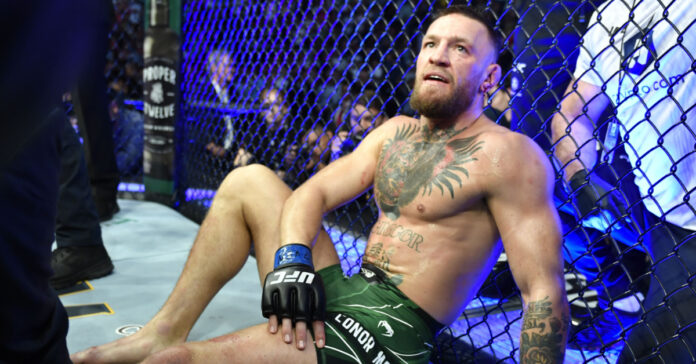 According to his manager, former two division UFC champion, Conor McGregor is not set to return to action until 2023.

It has now bene over a year since UFC superstar, Conor McGregor, infamously broke his leg in the first round of his trilogy bout with Dustin Poirier.

Immediately following the injury, McGregor vowed to return to the Octagon and was seen training shortly after and even targeted mid-2020 as a return time.

Now though, it seems that we will have to wait a while longer until we see the Irishman return. Talking to MMAJunkie, Tim Simpson, SVP of MMA for Paradigm Sports (McGregor’s management team) said that it would not be until next year that ‘The Notorious’ returns.

“The leg is still healing. I think there’s a little bit more to go on that, but he’s been training like a madman twice a day, every day. He’s got his full team out there, the McGregor Fast team, all his health and fitness guys, physio, boxing, coaching. He’s been going hard. He’s been training super hard. He’s in amazing shape, just final adjustments to get that leg back where it needs to be.”

Who will Conor McGregor face?

It’s still unclear on who McGregor would face when he does eventually return, the most financially beneficial and potentially the easiest matchup stylistically  for him, Nate Diaz, seems to be on his was out of the UFC.

Having lost twice now to Poirier, that matchup seems unlikely, but the likes of Michael Chandler or Tony Ferguson seem to fit the bill.

Both are big enough name value to warrant a fight with McGregor and both have showed some vulnerability in some of there past performances.

Who would you like to see Conor McGregor face?