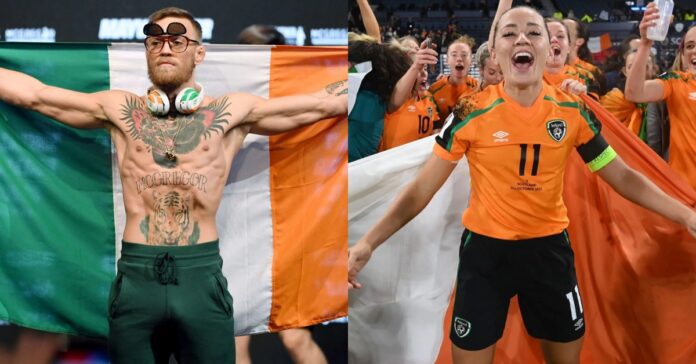 Following on from their victory the Ireland team was to be seen signing Wolfe Tones song ‘Celtic Symphony’ which contains the lyrics ‘Up The Ra’ referencing the IRA (Irish Republican Army).

The team received harsh criticism after the video emerged online of the players signing the song whilst celebrating their victory in the changing rooms post-match. Chloe Mustaki, a member of the match-winning squad would later appear on Sky Sports News to apologise on behalf of the squad for their actions.

Following the apology, Conor McGregor shared his thoughts on the matter in his own unique way. The Irishman uploaded a video to his social media editing Mustaki’s original response to include one of his many well-known catchphrases stating: ‘I would like to take his chance to apologise…to absolutely nobody.’

Conor McGregor came to the defence of the Ireland Women’s team following the backlash they received following Tuesday’s victory over Scotland. The ‘Notorious’ himself has first-hand experience of social media controversy given his frequent tirade of posts targeting fellow martial artists and anyone who speaks poorly of him.

Most notably McGregor received heavy criticism in the aftermath of his defeat to Dustin Poirier in their trilogy bout at UFC 264 after making remarks regarding the Louisiana-natives wife, Jolie Poirier.

McGregor would only make things worse after his former opponent Khabib Nurmagomedov congratulated Poirier on his well-deserved victory.

Khabib would remark that ‘Good always defeats evil’ in reference to Poirier’s success over McGregor, which resulted in the Irishman making comments on the former lightweight champion’s father, Abdulmanap Nurmagomedov.

Adulmanap Nurmagomedov died in July 2020 after battling health conditions and long-term effects brought on by the coronavirus. Responding to Khabib’s tweet McGregor suggested that ‘Covid is good and father is evil?’ making jokes in regards to Abdulmanap’s passing.

No doubt, Conor McGregor will continue to involve himself in controversies on Twitter, especially in the build-up to his highly anticipated return to the octagon, scheduled to occur in 2023.

What do you make of Conor McGregor’s tweet supporting the actions of the Ireland Women’s team?