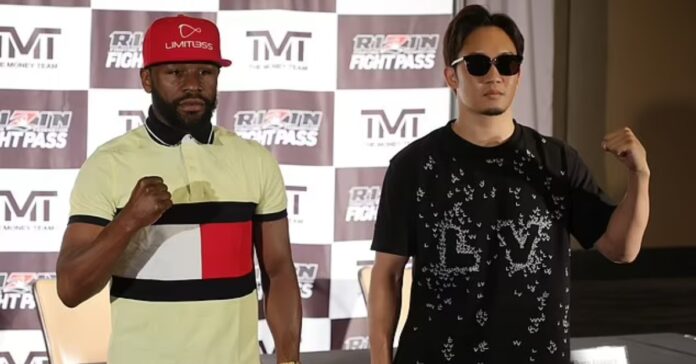 Undefeated former professional boxer, Floyd Mayweather is set for another high-profile exhibition boxing matchup since his 2017 retirement from the sport – this time drawing former two-weight RINGS champion and Rizin FF staple, Mikuru Asakura at a September event in a Japan return.

In his most recent professional foray, Grand Rapids native, Mayweather competed against former undisputed UFC featherweight and lightweight champion, Conor McGregor – scoring a tenth round TKO win over the Dubliner at the T-Mobile Arena in Las Vegas, Nevada.

Taking part in a trio of lucrative exhibition outings since then, Mayweather defeated Japanese kickboxing starlet, Tenshin Nasukawa in December of that year, before returning for a pair of matchups against YouTuber, Logan Paul, and then just last month in Abu Dhabi, UAE – Don Moore.

Set to return in tandem with Japanese promotion, Rizin FF in September for an exhibition outing against Asakura – the elder sibling of standout, Kai Asakura – official length and rules for the exhibition bout have yet to be determined at the time of publication.

“My legacy is already engraved in stone, like I said before, but it’s still great just to go around the world and entertain people from all walks of life,” Floyd Mayweather said at a press event to promote the bout. “I’m pretty sure he’s (Mikuru Asakura) gonna come out and give his best, like any and every guy, but I’ve seen every style, so, my job is just to go out there, be me, have fun and do what I do best.”

“My name is Mikuru Asakura, and I’ll be fighting Floyd Mayweahter,” Asakura said. “I’m an MMA fighter but I’m going to use this opportunity and I’m going to use him to raise my name and value internationally. I’m going to win this fight.” (Transcribed by Sky Sports)