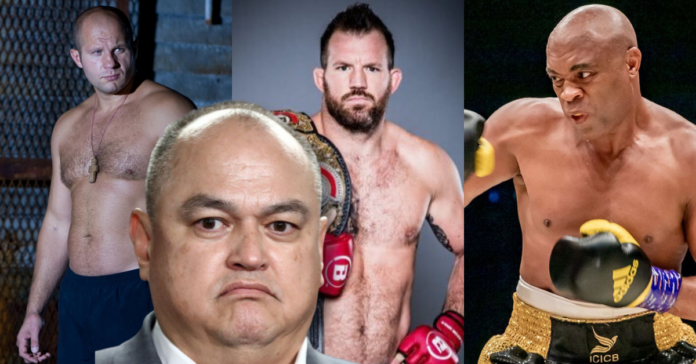 The greatest heavyweight to ever live Fedor Emelianenko is getting ready for his final fight in MMA. The Russian-born athlete was recently discussed in an interview with Bellator President Scott Coker.

According to Coker, Fedor most wants to avenge his earlier loss to Ryan Bader for his final match. Coker and Emelianenko have been working together on and off for more than a decade, originally they promoted alongside one another in Strikeforce.

While speaking on The MMA Hour with Ariel Helwani, the Bellator President said:

Fedor Emelianenko even asked for ‘Darth’ Bader in an interview in Russia where he said:

“For me, Bader remains the number one goal for now. They (Bellator) didn’t contact me, no one told me the news, I also learned about it from the Internet, from the media. Whether it is inflated, whether it attracts attention. But for now, I’m preparing for Bader.”

Ryan Bader and ‘The Last Emperor’ originally met in the Bellator Heavyweight World Grand Prix Final in which the US-born athlete earned a first-round knockout stoppage victory. In the same interview, Fedor went on to discuss an all-time MMA great Anderson Silva. Regarding ‘The Spider,’ Fedor Emelianenko said:

“Anderson Silva’s boxing is very good, considering that he is now winning boxing matches. But I do not rule out the fight completely. Yes, thank God, it turns out to win somewhere standing, to finish the fight faster, but no, the fight is in force. As for Anderson, he ended his last fights in MMA with defeats, there were several knockouts, despite good boxing. Let’s see. If Bellator does offer it, we will consider it.” [Russian to English courtesy of Google Translate]

It sounds as though ‘The Last Emperor’ Fedor Emelianenko is open to a match against the former Brazilian UFC world champion. Scott Coker, while speaking to Helwani, addressed this fight and put some cool water on these rumors. While speaking on The MMA Hour he said:

“Fedor hit me up, ‘Am I going to fight Anderson Silva?’ I said, ‘No, no. Everybody just calm down.’”

“I think Anderson enjoys boxing. I haven’t talked to him but I think he enjoys boxing and he’s going to continue boxing. He’s going to fight Jake Paul on the Showtime pay-per-view coming up. But if there was an opportunity, of course I would love to do it. That would be amazing. The two GOATs, that would be amazing ... As a fan, I would love it. It would be unbelievable.” [Transcript courtesy of MMA Fighting]

See the full interview with Scott Coker below: