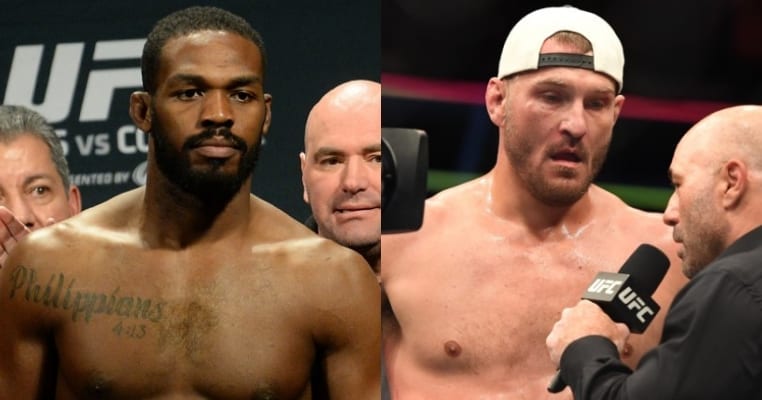 He may be awaiting a NSAC hearing for his disappointing USADA-imposed suspension following a positive test for two banned substances before his scheduled main event with arch rival Daniel Cormier at July 9’s UFC 200 from Las Vegas, but that didn’t stop Jon Jones from recently calling out UFC heavyweight champ Stipe Miocic.

Interim light heavyweight champ Jones has fought only one time since he outlasted Cormier in their first bout and could be suspended soon, yet the long-held talk of him moving p to heavyweight may never have been as realistic as it is today. Indeed, the Cleveland-based Miocic responded to “Bones'” callout, and now Jones’ longtime striking coach Mike Winkeljohn fueled that fire in the media.

In a recent appearance with Submission Radio, Winkeljohn gave the not-so-surprising opinion that he believes all-time great Jones would ‘dominate’ Miocic if only he could avoid a huge fight-changing shot:

“I’m a big believer in what Jon Jones can do. I told everybody a long time ago, nobody beats Jon Jones but himself, that’s what I said. Nobody studies as hard as Jon Jones, looking at tape. He knows what his fighter’s going to do before he does it and Jon can beat anybody out there. I think he’s going to just continue to dominate the light heavyweight division if he wants. If he wants to step up for Stipe, we just can’t get hit by those big punches. Other than that, I think Jon could dominate that fight. But like everything, Heavyweights, one punch makes a difference. So I would think that I would like to see Jon just dominate the light heavyweight division first and then try to move to heavyweight down the road.”

Winkeljohn continued on to give a ton of credit to the heavyweight champ, who has finished Andrei Arlovski, Fabricio Werdum, and Alistair Overeem throughout a truly historic year:

“(Stipe would be) the scariest fight to date because it’s the one-punch power and then it’s a strength of someone that can be on top of you. And Stipe is very, very strong and because of that one-punch power; it’s scary. It makes people second-guess what they’re doing. So for that reason it’s kind of the scariest fight in that way, but it’s kind of like fighting (Anthony) Johnson or anyone else like that – if you can avoid the big punches, then Jon Jones can dominate.”