LowKickMMA.com
Home UFC News Charles Oliveira Responds To GOAT Comparison With Khabib Nurmagomedov: “There Are No... 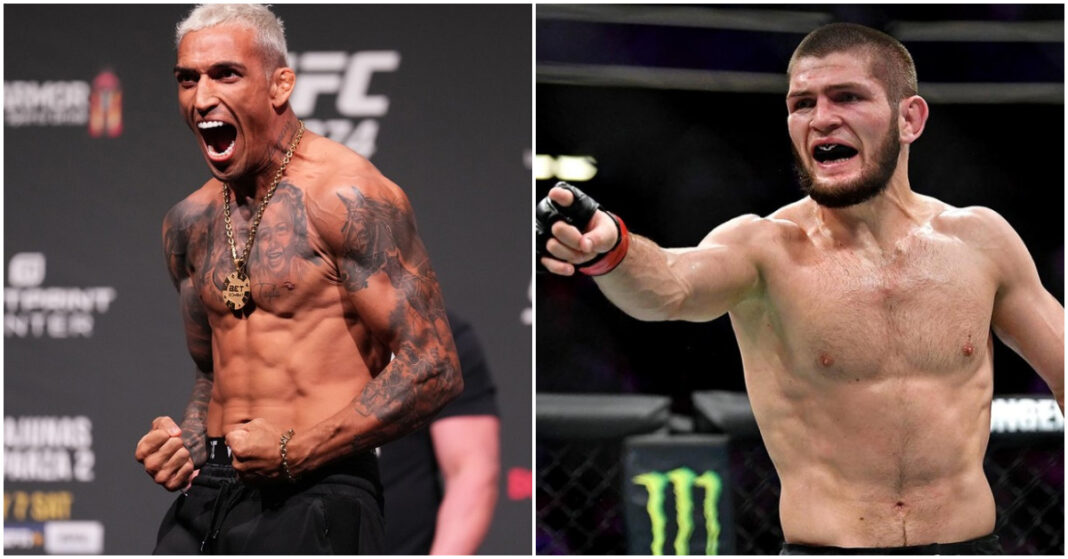 Due to the huge array of records Charles Oliveira has broken, he is now begging to enter the lightweight GOAT discussion.

This past weekend, Charles Oliveira extended his winning streak to 11 with a statement victory over Justin Gaethje at UFC 274. ‘Do Bronx’ has looked phenomenal in his recent outings and dispatched the human ‘Highlight’ reel soundly in the opening round. In one of the most impressive runs in the sport, Oliveira has racked up wins over former UFC, Bellator, and World Series of Fighting champions.

Oliveira snatched the lightweight gold against Michael Chandler and has beaten the likes of Dustin Poirier, Tony Ferguson, and now Gaethje in his last four. The 32-year-old Brazilian holds the record for most finishes in the UFC with 19 of his 21 wins coming via KO/TKO or submission.

In a recent episode of MMA Fighting’s Trocação Franca, Charles Oliveira made the case for himself as the greatest of all time.

“Most bonuses. Most submissions. Most finishes. What else? I’m breaking records. There are no arguments against facts. I’m the chosen one. That’s the reality,” Oliveira said.

During the same interview, Oliveira was asked how he would measure up against the legendary Khabib Nurmagomedov and BJ Penn in the debate for the greatest 155-lbs fighter of all time.

Initially, Oliveira backed himself as “the greatest of all time.” Then, he took a moment to regroup as he continued his response.

“I’m getting there,” he said. “I’m becoming one of the best of all-time. I don’t think [I am] yet. One step at a time. I’m up there. We have to keep our feet on the ground, be humble. Let people think that. What do you think, am I the greatest of all-time? That’s the question.

“My age, 32, with records of most submissions and bonuses and so many other things I have to start writing down so I don’t forget. Lightweight champion, 11 wins in a row. Of those 11 wins, only one decision. We’re happy.”

Do you believe Charles Oliveira to be the GOAT over Khabib or BJ Penn?