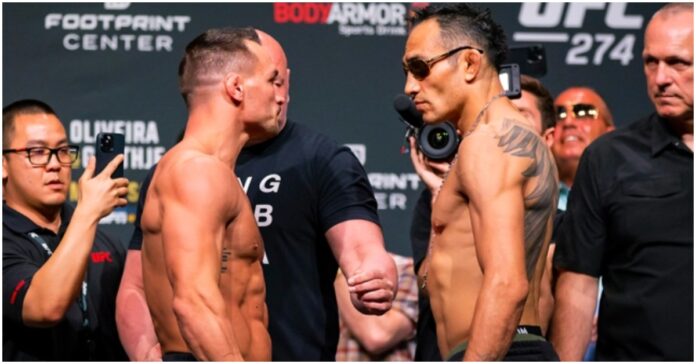 UFC 274’s main card features two electric lightweight bouts that both have fans abuzz. Whilst the main event between Charles Oliveira and Justin Gaethje will take the headlines, the ‘co-co-main’ event between Michael Chandler and Tony Ferguson has the potential to steal the show.

Both men are riding losing streaks right now, and a win at UFC 274 is imperative for either man to reinstate himself into the 155lb title picture. Chandler is a heavy betting favorite, but Ferguson has been in fine form for the entirety of fight week, looking exceptional on the scales.

Let’s see who the Lowkick MMA staff see winning this one:

Contrary to what I imagine will be the popular opinion, I’m going to go with Tony Ferguson for this one. ‘El Cucuy‘ is undeniably out of his prime, but Michael Chandler is no spring chicken either. I believe the first round will determine how the fight plays out, in that there is a solid chance Chander will simply finish Ferguson before the start of the second. However, should Ferguson make it to round 2, Chandler will begin to lose his explosivity. It is then that Ferguson can begin to implement his own gameplan, landing lethal attritional damage on his opponent, only increasing the pressure as the fight goes on. It may be a long shot, but Ferguson by decision is my official prediction for UFC 274.

Personally, I’ve seen something entirely different from former interim champion, Tony Ferguson this week ahead of UFC 274. I’d lean away from a cerebral moniker, and lean to a dialed-in, motivated, and composed Ferguson, even reminiscent of his most recent wins against Donald Cerrone and Anthony Pettis. However, walking the walk and appearing reinvigorated is only half the battle. Michael Chandler has proven to be one of the fastest starters in an opening round we’ve seen in the last couple years. Stylistically, it’s a less than straightforward matchup for both, to be honest, but as for Chandler – he really needs to be met with a version of Ferguson, I myself am not wholly sure exists anymore. I think collectively fans and pundits alike are hoping for a better showing from Ferguson, but the early exchanges will go a long way in determining how this one plays out. It’s really difficult to look beyond Chandler given what we know regarding Ferguson’s form and skid, so anything less than a decision choice in his favor would be naive of me.

Personally, Tony Ferguson vs. Michael Chandler is my most anticipated bout at UFC 274. As of late, the game-plan to beat Ferguson has been put out there. With Chandler’s wrestling credentials, I expect him to hand Ferguson a fourth straight loss, which I never thought I’d say years back. The fight is there to be won relatively comfortably for Chandler if he fights smart and doesn’t play up the crowd. Ferguson thrives in the chaos and on the crowd’s energy. Chandler can not get drawn into that, which will heavily favor Ferguson. Chandler by decision for me, with Ferguson being too tough for his own good.

Another great fight on UFC 274. I feel like it’s an important fight for both, especially if they want to be considered for the title again. Tony presents a big threat striking wise and while Chandler comes off as a better wrestler, I doubt he’ll take Tony down. It’ll be a fan-friendly fight that I see Chandler winning by decision. The only way Chandler loses this one is if he throws caution to the wind and gets caught.

Two of the most dangerous men on the UFC roster are clashing in what could be another potential fight of the year. Chandler and Ferguson will, without a doubt, meet in the middle of that octagon and push each other to the absolute limit to see who really wants to take the steps back towards the belt. I believe the time off for Tony may have been just what he needed, but Chandler knows the danger and the challenge he has in front of him at UFC 274 and for that reason I’m picking Chandler to win. I believe he will be very smart in the cage on Saturday and will be too fast for Ferguson, beating him to the punch and controlling the action the whole time.

This bout has all the makings to be the fight of the night. Ferguson and Chandler just love violence and that gets everyone excited. Ferguson has lost his last few fights by being dominated on the ground. I don’t think Chandler is going to wrestle Ferguson and will be going for the finish. With that being said, I think that works in the favor of Ferguson. I think Ferguson has something to prove in this fight and will be the more technically sound fighter. I have Ferguson winning by decision. With that being said, this fight is going to be awesome and I could see it going either way.

Man, oh man. When is Tony Ferguson going to catch a break? ‘El Cucuy’ has faced absolutely monstrous matchups in his last three fights, and he doesn’t exactly face an easier task here. Michael Chandler is on a slide, yes, but he still has massive firepower in his hands. Plus, he can utilize his wrestling if he really wants to. I love Tony, and the biased side of me wants to see him win. However, I see Michael Chander pushing the pace and eventually being too much. Late stoppage for Chandler at UFC 274.

Who do you see coming out on top in this UFC 274 lightweight clash?