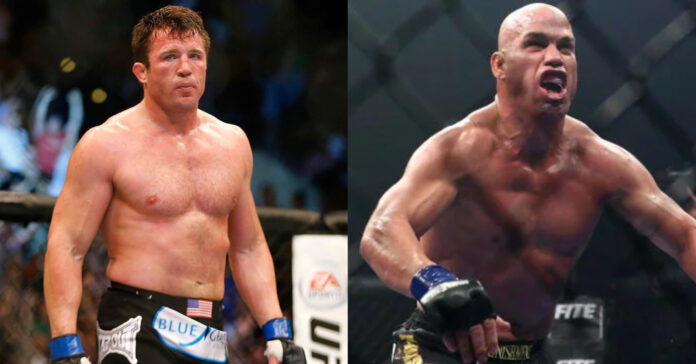 Chael Sonnen hilariously responds to Tito Ortiz’s claims of a retirement fight scheduled for February between the two fighters.

Ortiz went on the “Adam Carolla Show” and claimed that Sonnen and himself would be facing off once again inside the cage. Ortiz most recently was knocked out by Anderson Silva in a boxing match last September. The match only lasted a round, as Silva was able to starch Ortiz quickly.

Ortiz is lobbying for one more mixed martial arts bout, then he would leave the combat sports world for good. Ortiz claims he will be fighting Sonnen on the “Freedom Fight Night” card, which is designed to raise money for the Republican Party.

Chael Sonnen tweeted out a response to Ortiz’s claims

This would be the second fight between Ortiz and Sonnen, if it truly does happen. In the first bout, Ortiz was able to submit Sonnen in the first round with a rear-naked choke. The match was fought under the Bellator promotion. Ortiz has won five of his last six fights and is even on a three fight win streak. During his win streak he has beaten Sonnen, Chuck Liddell, and former WWE superstar Alberto Del Rio. Ortiz has not had a professional MMA fight since 2019.

Sonnen on the other hand has dropped four of his last six fights and the 45 year old hasn’t fought since 2019 as well. He dropped his last fight against Lyoto Machida, while being TKO’d by a flying knee.

Would you like to see Ortiz and Sonnen face off again?