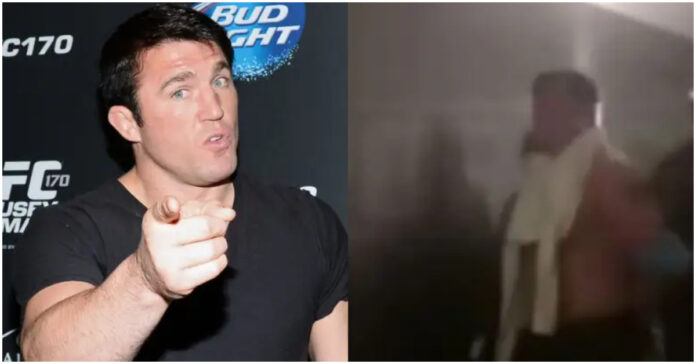 Former UFC fighter Chael Sonnen was charged this month with a felony count of battery by strangulation and 10 misdemeanor counts of battery-related to the alleged attack.

On Friday, Christopher and Julie Stellpflug filed a lawsuit against the former professional fighter, who they claim repeatedly punched them without provocation in a hallway of the Four Seasons, 3960 Las Vegas Boulevard South. The couple said they feared for their lives when they were attacked by Sonnen in the hotel hallway in December.

In a phone interview with the Las Vegas Review-Journal, Christopher Stellpflug, a 48-year-old dentist from San Luis Obispo, California, said, “Am I going to die? Is this monster going to kill my wife next, and my kids will have no parents?”.

The lawsuit reported that the couple was walking back to their room on the 35th floor of the hotel at about 7:30 pm. on Dec. 18 when they saw a man in the hallway who appeared to be intoxicated, “uttering unintelligible noises.” Police later identified Chael Sonnen as the man and reported him to be barefoot and wearing a torn, bloody shirt around his neck.

Sonnen was claimed to have knocked a drink out of Christopher Stellpflug’s hand, “without provocation or any communication whatsoever.” The couple’s attorney Kory Kaplan also wrote in the lawsuit that the ex-UFC fighter began punching Dr. Stellpflug in the head when his wife told him they “did not want any trouble.”

“Dr. Stellpflug, helplessly laying on the floor, then witnessed Sonnen turn his attention to Mrs. Stellpflug and viciously attack her,” Kaplan wrote.

Did Chael Sonnen really attack the couple without any provocation?

According to a copy of a Metropolitan Police Department incident report, Chael Sonnen had punched another guest at the hotel minutes before the couple walked in the hallway. He allegedly punched several of the security guards who arrived as he was attacking the Stellpflugs. He is also accused of striking one security guard in the nose with his knee and kicking another in the chest before he was detained by more employees.

Sonnen has not spoken about the incident publicly yet and was suspended by ESPN following the charges. As per the online court records, ‘The Bad Guy’ was issued five misdemeanor citations in January that a judge dismissed. The felony and 10 misdemeanor battery counts were later filed on March 16.

Brendan Schaub, friend and fellow fighter, gave his account of Chael Sonnen’s version of the incident on his podcast claiming, “Some drunk guy with his girl kept making comments about (Sonnen’s wife, Brittany), saying about her (body parts) right in front of him.

“Well, play stupid games, win stupid prizes, cause you are talking and disrespecting one of the toughest guys on the planet and definitely one of the toughest ever to compete in the UFC or Bellator for that matter. And you’re doing it in front of his face, then there’s gonna be repercussions.”

However, as per the police reports, Brittany Sonnen told police she was asleep “for the entirety of the brawl.” A hearing in Sonnen’s criminal case is scheduled for Wednesday.

Do you believe Chael Sonnen will be found guilty of the alleged charges?