LowKickMMA.com
Home UFC News Chael Sonnen Suspended By ESPN After Being Charged With 11 Counts Of... 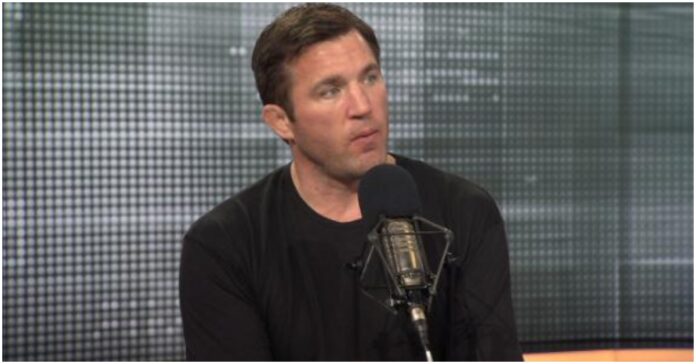 Chael Sonnen will not be appearing on ESPN again anytime soon.

The former UFC fighter has carved out a successful career for himself as an MMA analyst for the sports TV giant but that relationship appears to be on the rocks after Sonnen was recently hit with 11 charges of battery.

“Chael will not appear on ESPN as we explore the details of these serious charges,” the company said in a statement.

According to court records, prosecutors filed against the MMA legend last week. Sonnen is facing a felony battery by strangulation charge and 10 other misdemeanour battery charges.

‘The Bad Guy’ was involved in a brawl at the Luxor Hotel and Casino in Las Vegas on December 18. Police responded to reports of a disturbance just after 7 p.m. on a Saturday night. According to witnesses, Sonnen was seen banging on the hotel room door of an unidentified couple before getting into an altercation with the male. The female was seen and heard by witnesses asking for help as Sonnen allegedly assaulted her partner. According to the police report, the former UFC and Bellator fighter beat five separate victims and was briefly detained by law enforcement.

In January, it was reported that Sonnen would not be facing any charges relating to the hotel brawl.

“The misdemeanor battery case against Chael Sonnen was dismissed without prejudice today in Las Vegas Justice Court, per online records,” Marc Raimondi of ESPN wrote on social media. “Sonnen was issued five citations last month stemming from a hotel incident in which he was accused of battery against five people.”

As the case was dismissed “without prejudice” the state had the option to refile the charges if they chose to, something they clearly opted to do earlier this month.

In the new court documents, officials accuse Sonnen of beating up five men and one woman during the altercation at a Vegas hotel on December 18.

‘The American Gangster’ allegedly choked a man, punched and/or struck a woman, and punched and/or kneed others in the head and face during the incident.

Do you think ESPN made the right call by suspending Chael Sonnen pending this police investigation?