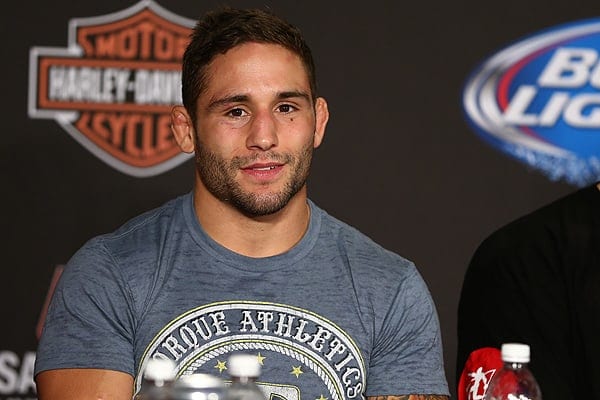 As UFC featherweight contender Conor McGregor prepares to fight at UFC 189, the MMA (mixed martial arts) world holds it’s breath in anticipation of who he will face on July 11th. The 145-pound champion Jose Aldo isn’t officially out of the main event in Las Vegas, but he also isn’t exactly a sure bet to make the fight. Two-time title challenger Chad Mendes has officially been put on standby for the champ’s replacement, much to the dismay of Frankie Edgar.

‘Money’ will be getting paid whether he fights at UFC 189 or not, and is eager to take any opportunity to slate his potential opponent ‘The Notorious’. Talking with The MMA Hour, via MMAMania Mendes says that the better option for McGregor is Aldo:

“As soon as they gave me the call and told me to get ready, I basically shut out any possibility that Aldo was coming back. I’m treating this like I am fighting Conor for the title. I’m getting my weight down, I’m coming up with a game plan, going over it, fine-tuning cardio. I’m pretending like I’m getting in there and I’m fighting. That’s my mindset. I wake up every morning, I sit there and gameplan stuff when I’m laying in bed before I get out. Every single morning when I wake up. I’m excited. I think this is a great matchup for me. Conor is a tough guy, but, he is a guy that I know I can beat. He better pray that Aldo can get in there and fight because I am going to mess that dude up.”

Mendes and McGregor have history, with the Irish star once famously claiming he would ‘rest his balls’ on the WEC veteran’s forehead should they ever fight. Although Aldo vs. McGregor is a huge fight that many of us really want to see, surely the second option isn’t so bad. At least that way we might get to see Aldo at 100%, because taking your last weeks of training camp out will never work out well.

Should the champion simply make the smart move? Many fans were calling for McGregor to fight once more before a title shot anyway, and against either Mendes or Edgar, so why not do it now?