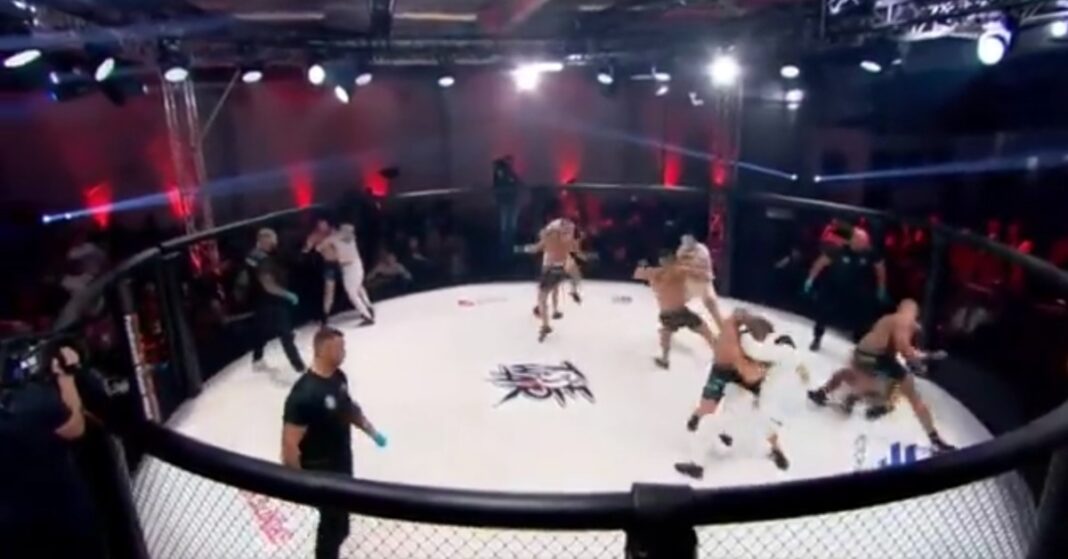 A rather peculiar five-on-five professional mixed martial arts fight took place at an event billed as ‘The War 3’ last night in Poland, where 10 competitors fought in groups of five simultaneously inside the confines of a cage.

The fight, which features 10 separate fighters competing at the same time, is overseen by three referees, as the group of five competing as part of two teams fight simultaneously as part of ‘The War 3’ event.

Quickly, footage of ‘The War 3’ event, as well as the team fight, surfaced on social media, with Twitter users sharing their thoughts on the rather peculiar and outlandish event.

One team receives brutal, one-sided loss in hard to watch five-on-five fight at ‘The War 3’ event

In rather unsightly viewing, however, quickly we witnessed a rather brutal knockout as a competitor, wearing a white rashguard and shorts was dropped among the carnage inside the cage with a series of winging shots. However, with referees attempting to watch five fights at once, the competitor who suffered the early knockdown found himself on the receiving end of some rather worrying punishment as a fighter on the opposition team threw a volley of ground strikes.

The fighter is eventually saved by the cage official who brings him back to his feet inside the cage and appears to hold him up, as the action continues without the fallen fighter receiving immediate treatment or assessment from a medical professional.

Soon thereafter, the opposition team, wearing black shorts score a pair of quickfire ground strikes knockouts — with two competitors, in particular, teaming up to knockout a sole opposition team member as the fight becomes more and more difficult to spectate.

At the end of the fight at ‘The War 3’, the team sporting black shorts emerge with a comprehensive 5-0 victory — with the final competitor on the opposing team finding himself on the receiving end of punishment from eventually three fighters at once. However, during the broadcast of the event, the footage of fighters receiving subsequent knockout strikes was cut to footage of the audience as officials failed to corral fighters dishing out punishment in timely fashion.

Receiving mass criticism across social media for the untimely stoppages, the event also showcased a two-on-two fight as well as a fight in which a female competitor appeared to collapse in her corner between rounds, requiring removal from the cage on a stretcher — to go with a fight which seen a competitor dropped countless times before the bout was ultimately ruled a ‘No Contest’ following an illegal ground strike.

Prominent Twitter user, @Grabaka_Hitman — otherwise known as Caposa commented on the event, and in particular the five-on-five contest and early knockout — claiming that the subsequent strikes received made the barrage look like “attempted murder“.

“The KO and subsequent follow-ups (strikes) around the 17 second mark legit looks like attempted murder,” Caposa tweeted. “Three refs isn’t enough for these.“

This latest freakshow mixed martial arts event comes off the back of another highly-criticized event which also took place in Poland which saw a woman suffer a brutal second round knockout at the hands of a man in an intergender mixed martial arts fight.