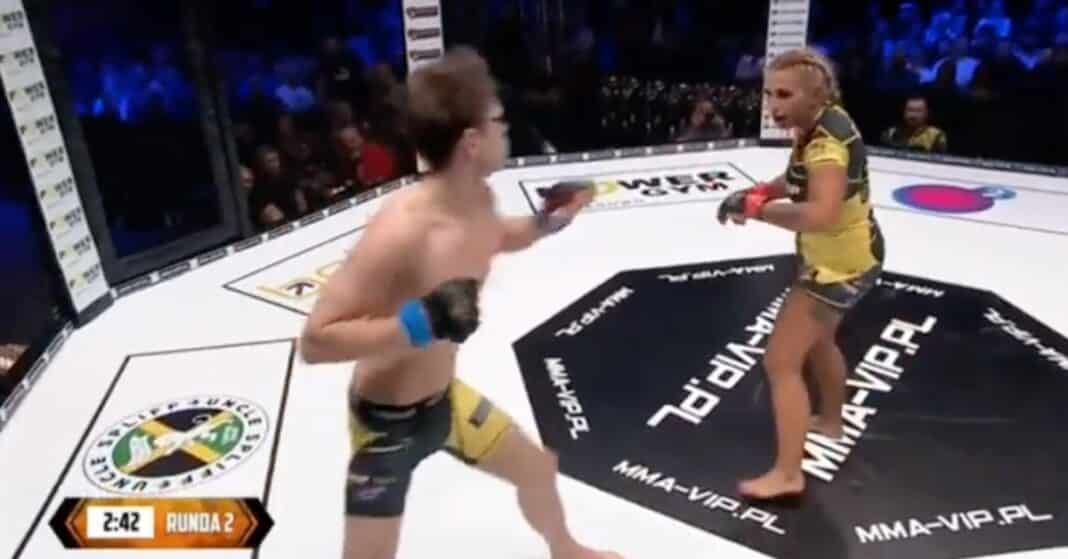 Video footage of the bout began to surface on the social media platform, Twitter on Friday initially, with the male contestant, who appears to be wearing eye makeup, stopping the female contestant with strikes in the second round to score a knockout victory, via a series of ground strikes.

In the minute-long video, both contestants exchange strikes on the feet before the male secures a takedown via a Judo throw near the cage’s fence, before assuming side control. As the female attempts to land strikes off her back, the male then establishes full mount, before landing a series of ground strikes resulting in a TKO stoppage upon the referee’s intervention.

The promotion that hosted the fights is called MMA-VIP and the card in question featured many freakshow fights, promoted by Marcin Najman.

“The first-ever clashes between women and men, in which the controversial “Polish Ken” and “Mua Boy” will appear,” Read the billing of the event on the promotion’s official website.”Each of the fights taking place during the MMA-VIP 3 gala carries an incredible load of emotions that you will not find at other freak-fight events. The organizer and originator of this project, Marcin Najman, is a guarantee of creating a spectacle different than anything you’ve seen so far.“

This latest intergender bout, which brings into question how this sort of matchup could even find sanctioning, comes off the back of another rather high-profile intergender bout that took place in Russia this time last year.

On that occasion, Mazdyuk managed to take home a first round knockout victory over Chistyakov, which in turn, earned her a multi-fight deal under the Scott Coker-led, Bellator MMA banner.

The 29-year-old made her promotional debut last weekend at the Bellator 269 event in Moscow, Russia, where she suffered a second round knockout loss via a series of ground strikes against Katarzyna Sadura in her first walk under the promotion’s scrutiny.