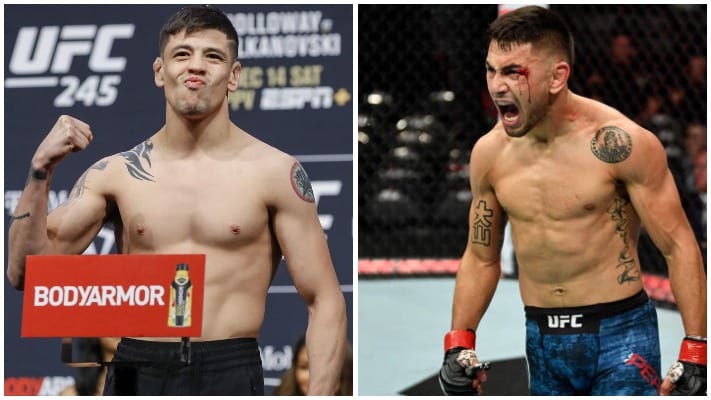 Another pivotal flyweight clash has just been added to UFC 255 on November 21. Brandon Moreno will square off against fellow contender Alex Perez with the winner being next in line for a shot at the 125lb title. In the UFC 255 main event, Deiveson Figueiredo will defend his flyweight belt against the former bantamweight champion Cody Garbrandt who is has been gifted an immediate title shot for his first fight in a new weight class.

Former TUF competitor Brandon Moreno has been in great form recently. The Mexican was cut after losing two straight UFC fights but rebounded well outside the octagon picking up the LFA flyweight title and earning a quick recall to the big show. Moreno picked up a draw in his first fight back against flyweight standout Askar Askarov before scoring back-to-back decision wins over Kai Kara-France and Jussier Formiga.

Perez Hoping To Continue His Streak

Alex Perez is in good form himself after three straight wins. The 28-year-old briefly stepped up bantamweight last year to take on Mark De La Rosa. Perez picked up a unanimous decision win in that fight before dropping back to flyweight. Since then he has impressed massively scoring two first round stoppages against Jordan Espinosa and Jussier Formiga – earning performance of the night bonuses in both fights.

UFC 255 will take place on November 21 Nov. 21 in a location yet to be officially announced. ‘Fight Island’ in Abu Dhabi is rumoured to be where this pay-per-view event will land. Moreno vs. Perez is the third bout added to the card topped by Figueiredo vs. Garbrandt. Valentina Shevchenko is also expected to defend her flyweight title on November 21 against Jennifer Maia in the co-main event of the evening.

Who wins at this flyweight number one contender bout at UFC 255? Brandon Moreno or Alex Perez?