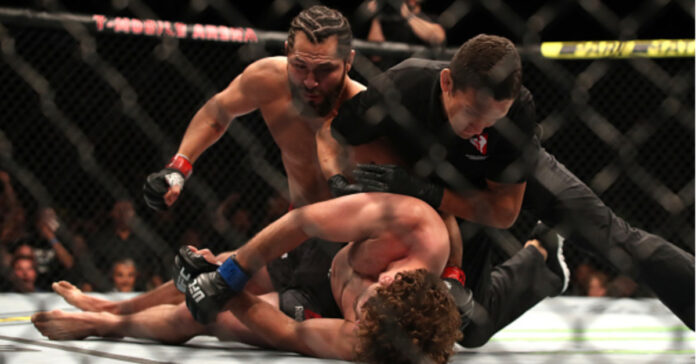 Ben Askren says a rematch of his UFC 239 bout with Jorge Masvidal is the only thing that would bring him out of retirement.

The former ONE welterweight world champion made his way to the UFC following a first-of-its-kind blockbuster trade that sent former UFC flyweight champion Demetrious Johnson to the Asia-based promotion. After successful runs in Bellator MMA and ONE that saw the Iowa native amass an impressive 18-0-1 record, Ben Askren made his promotional debut at UFC 235 against Octagon legend ‘Ruthless’ Robbie Lawler.

‘Funky’ made quick work of Lawler, dispatching him in the first round via submission. Already on the short-list for potential title contenders, Askren was paired up with Masvidal at UFC 239. As the opening bell rang, ‘Gamebred’ came sprinting out of his corner, delivering a massive flying knee that caught Askren perfectly, immediately rendering him unconscious just five seconds into the contest. It would become the fastest knockout in UFC history and the clip quickly went viral.

Ben Askren would only have one more fight inside the Octagon, a losing effort against Demian Maia just three months after his brutal knockout loss to Masvidal. In a recent response to a question on Twitter about how he sees a potential rematch going, ‘Funky’ stated that running back their brief UFC 239 encounter is the only thing that would bring him out of retirement.

“It’s the only thing that I would come out of retirement for,” Askren tweeted.

Following Leon Edwards‘ shocking fifth-round head kick knockout of Kamaru Usman at UFC 278, division rival Jorge Masvidal has been angling himself for a potential title shot. Of course, Masvidal and Edwards have a history. It was a little over three years ago that the two had a scuffle backstage at an event in the UK where ‘Gamebred’ delivered his famous “three-piece and a soda.” The two were scheduled to finally square off at UFC 269 in December, but Masvidal withdrew due to an injury.

Now that Edwards is the UFC’s welterweight champion, Masvidal looks to rekindle their rivalry and cash in. Ben Askren called out ‘Gamebred’ on Twitter for his desperate attempts to lobby for a fight with Edwards now that he is the holder of the gold.

“Been off the grid camping….. why is not getting a title shot off 3 losses in a row a controversial opinion,” Askren said on Twitter before following up with two more Tweets.

“Also I would rather be a has-been than a never was.”

“Lastly you can’t avoid someone for 3 years then try to pick a fight once they get a belt.”