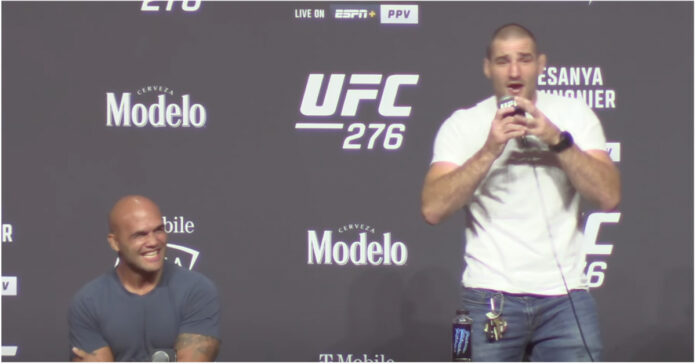 The UFC’s 276 press conference has set the tone for what is to come In Last Vegas on Saturday. However, veteran Robbie Lawler (29-15 MMA) was in hysterics as he found himself in a front-row seat to a Sean Stricklands comedy show.

Dana White has made it his goal to steal July 4th weekend, and it’s been so far so good for the UFC president, with the pay-per-view press conference already setting the tone for what’s to come in the T-Mobile arena later this evening.

Middleweight Sean Strickland (25-3 MMA) took to his social media where he expressed concern over his own behavior prior to the press event.

Inevitably Strickland didn’t disappoint as he couldn’t contain his excitement on his first question, before standing up and labeling the MMA media and fans in attendance as “vicious b*stards” until telling himself to “calm down”.

“This is my first press conference; you guys are a bunch of vicious bastards. Hearing the way, you guys talk, I want to go down there and punch all of you f**kers in the face. Jesus Christ you guys are mean.”

The reaction of the former Welterweight Champion Robbie Lawler is everything, perfectly epitomizing how many MMA fans around the world reacted to the madness that unfolded on Thursday.

Strickland seemed to play off the laughter of Lawler, even going after the Middleweight King and the headliner of the UFC 276 event, Israel Adesanya. As he eyes his 185lbs title fight if all things go to his plan against Alex Pereira (5-1 MMA) on Saturday night.

“We are gonna have a war, but after I beat Alex, you’re gonna see a whole different guy. I’m gonna start painting my nails, act like a female … I’m gonna be the best Champion you’ve ever seen. Let’s go!”

Robbie Lawler makes his return to the octagon on Saturday

Robbie Lawler will make the walk back into the octagon, as he takes on dangerous striker Bryan Barberena (17-8 MMA) who is coming off an impressive fight of the year contender against a durable Mike Brown (25-19 MMA).

In spite of the fact that he is now entering his forties, Lawler has decided to continue to keep his gloves strapped, for the genuine love he has for his job and everything that comes with it.

Do you think Robbie Lawler can still get the job done at the age of 40?