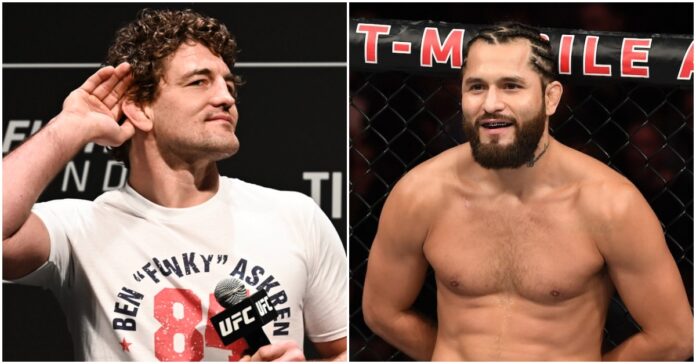 Ben Askren has shared his thoughts on the ‘hypocritical’ Jorge Masvidal following the news Masvidal had assaulted Colby Covington at a restaurant in Miami.

It is believed that whilst Covington was sat down having dinner with the ‘Nelk Boys’ when Masvidal ran up on him catching him off-guard landing two shots on him, one of which has supposedly cracked a tooth on Covington.

Masvidal received heavy backlash from the community following the incident, many people argued that because he couldn’t settle his differences with Covington despite sharing the octagon for twenty-five minutes he should just move on. Whilst others were quick to remind you that Masvidal is ‘about that life’ so his antics should come as no surprise to anyone.

Askren believes insecurities in Gamebred himself led him to do this. Having been on the end of Masvidal’s highlight moment Askren knows how to deal with being on the losing end, something he feels Jorge still hasn’t been able to deal with.

“Imagine having 25 minutes to punch someone as many times as you want legally, but you can’t get it done so you gotta sneak up at the steak house”

“The couple times I got beat up I just thought shit that sucked I should trained harder or employed better tactics. Not let me sneak up and attack him on the street bc I have anger/insecurity issues.”

“Jorge also talked about my family, so he is being a hypocritical terd on top of all else. Suck it up butter cup, you got whipped. It happens sometimes.”

Despite having shared the octagon now it seems that the beef between Jorge Masvidal and Colby Covington will never quite be settled. Although Covington got his hand raised in their fight it seems that has resolved no issues for either man.

What do you make of Jorge Masvidal’s actions?