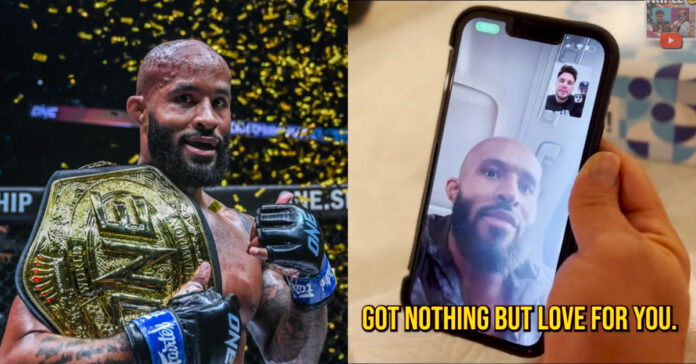 Demetrious Johnson called his friend Henry Cejudo after reclaiming the ONE Championship gold at ONE on Prime Video 1.

Former UFC champion Johnson got the chance to avenge his loss to former titleholder Adriano Moraes this past Friday in Singapore. The two had previously faced off last year in April, with Moraes scoring a violent knee finish to dethrone Johnson. Over a year from their first clash, Johnson defeated Moraes with an impressive fourth-round knockout to become the flyweight champion again.

Following the incredible victory, Johnson took the time to FaceTime former two-division UFC champion Henry Cejudo. Johnson had trained with Cejudo in preparation for the highly-anticipated rematch and expressed his gratitude for Cejudo’s help.

“I’m just calling to say ‘What’s up, man?” Johnson said. “Got nothing but love for you. Not gassing you up, but saying good things about you and, you know, it was very appreciative for me to come out and get to work with you. Event though it was a week, two weeks, just to balance things out, vibe out and just—I guess when I came to train with you and you’re like, ‘Dude, you’re nasty in that clinch.’ It’s like, OK, I’m gonna stay with the clinch.”

Cejudo and Johnson shared the octagon on two occasions, with each man getting a win over the other. “Triple C” had expressed his admiration for arguably the greatest mixed martial artist of all time. The respect between them is clear as Cejudo ended the call with a gracious message.