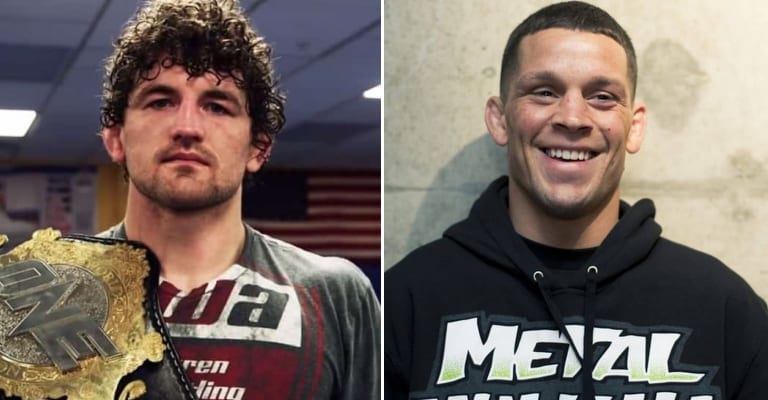 Askren is currently retired. But that won’t stop him from offering his opinion on the buzzing discussion about a new UFC 165-pound division. Normal lightweights Nate Diaz and Dustin Poirier have been going back-and-forth on social media trying to get the UFC to finally create the often-rumored division.

While the UFC isn’t biting as of yet, Diaz has kept the pressure high to get the ball rolling at 165. He even issued them a classic Diaz “don’t be scared” tweet.

“Nothing about you is very scary. Arms the size of a noodle, takedown defense like a middle schooler and very amateur smack talk. I highly doubt anyone is scared of someone who is 6-6 in his last 12.”

Nothing about you is very scary. Arms the size of a noodle, takedown defense like a middle schooler and very amateur smack talk. I highly doubt anyone is scared of someone who is 6-6 in his last 12. https://t.co/jVR5XJiERA

Askren was then reminded that Diaz had never pulled out of a fight whether he was injured or not. “Funky” clapped back that he never had either, but also had a long list of other accomplishments to top Diaz:

Askren makes a point there, yet it’s a bit unsatisfying at the core. The dominant wrestler was a champion. He also retired on top without a loss, which is something few if any MMA fighters can truly claim.

However, he never fought in the UFC despite long-running discussions to do so. A Diaz fight may never have materialized regardless. Askren’s smothering style has long been a turnoff to fans due to his perceived “boring” in-cage presence. It’s a bit overexaggerated, however.

Diaz will finally return to action at November 3’s UFC 230 from New York. He’s teased that he won’t be available to fight on the card. If that’s true, he’s looking in excellent physical shape to not be fighting. Diaz is a top-level draw in the UFC and would likely lap Askren in terms of attention no matter the records.

Askren retired last year as well. That makes his callout bittersweet because we’ll most likely never see them fight. Was “Funky” right to blast Diaz, or is it a moot point?