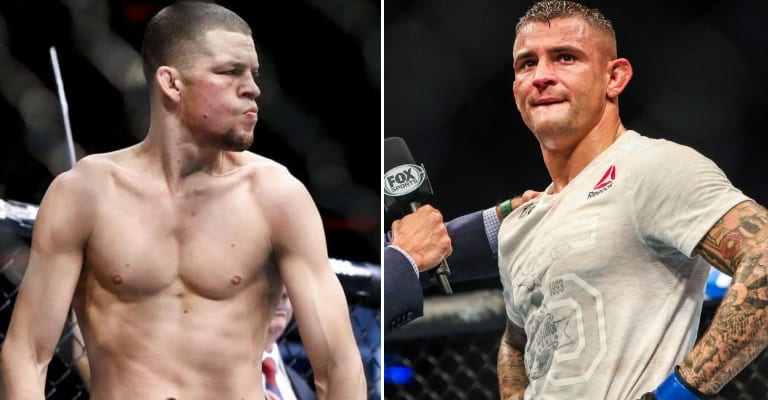 It’s only five weeks away, but November 3’s UFC 230 from New York still doesn’t have a main event. Nate Diaz says he has that taken care of.

Diaz will return from an over two-year absence to face Dustin Poirier at UFC 230. The fight has been billed as the co-main event, but no champions appear available to fight on the card.

Diaz believes that the answer is simple, however. He just announced on social media tonight (Tues., September 25, 2018) that he was “happy to be bringing a new weight ‘devision’ to the UFC” with the 165-pound “superfighter devision”:

Poirier soon chimed in with a similar statement. He claimed he had finally made it to his coveted UFC title fight:

Its been a long journey but here we are. NYC 1st ever 165lb Title in the UFC! #THEREWILLBEBLOOD #THUGJITSU

Ariel Helwani said earlier tonight that the UFC was considering an interim title fight with no champions available for UFC 230:

With no champions available, UFC is discussing adding an interim title fight to the MSG card, sources tell @espn. It’s not finalized yet, though. Tickets go on sale tomorrow and they’d like to have a main event place by then, if possible.

In Diaz vs. Poirier, the UFC could have an official title for the oft-discussed 165-pound division. In reality, forced interim title fights have not performed well on pay-per-view due to their perceived devaluation of UFC titles.

UFC President Dana White has been lukewarm on the new division, to say the least. We’ll have to wait and see if what Diaz and Poirier claimed comes true.