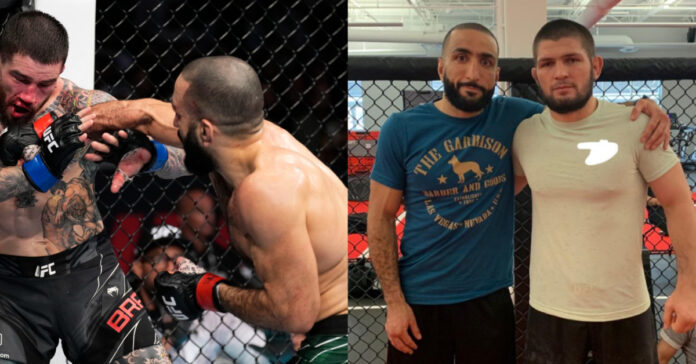 Extending his winning streak to eight in a row, Muhammad put away Brady in the second round via TKO. Speaking to ESPN’s Marc Raimondi, Muhammad discussed his training camp building up to the UFC 280 showdown, specifically his experience working with UFC Hall of Famer, Khabib Nurmagomedov.

“This guy doesn’t understand tired. We’re going from sparring to grappling, and then he tells me ‘Come in the cage’ and he’s putting me on the fence and taking me down at will and just, like, drowning me,” Muhammad said.

“I’m sitting there dead and all of a sudden at the end of it, they’re like, ‘Well, OK, you got three minutes of planks.’ I’m sitting there, dripping, I look to my right and I see Islam there. He tells me, ‘Khabib does not know tired.’ There needs to be some rest in between because the practices are so hard that my body ended up breaking down halfway through.”

Belal Muhammad compared Nurmagomedov’s determination and strive for greatness to that of NBA legend Kobe Bryant, the five-time NBA Champion, and 18-time NBA All-Star who tragically passed away in a helicopter crash with his daughter Gianna and seven others in 2020.

“He demands greatness from you. I just watched (The Redeem Team) and how Kobe Bryant would go to the gym at 4 AM and it made the other guys work that much harder. Khabib is the same way where you want to do extra for him. You want to push yourself much harder for him because he doesn’t have to be there. He’s got all the money in the world, he’s got all the accolades in the world, he’s been a champion.

“He’s accomplished it all, but he’s giving you his time, his knowledge. Even when we’d do warm-ups and he’d tell us, ‘You guys aren’t pushing hard enough. What are you guys doing? You gotta do it again.’ So we have to go again. There’ll be some guys that’ll come in tired, and he’ll take their phone from them at night, and he’ll be like, ‘You need to go to sleep on time.’” (H/T Bloody Elbow)

Under the tutelage of Nurmagomedov, Belal Muhammad improved to 22-3-0. His knockout of Sean Brady earned him a $50,000 performance bonus and moved him into the No. 4 stop on the promotion’s welterweight rankings.