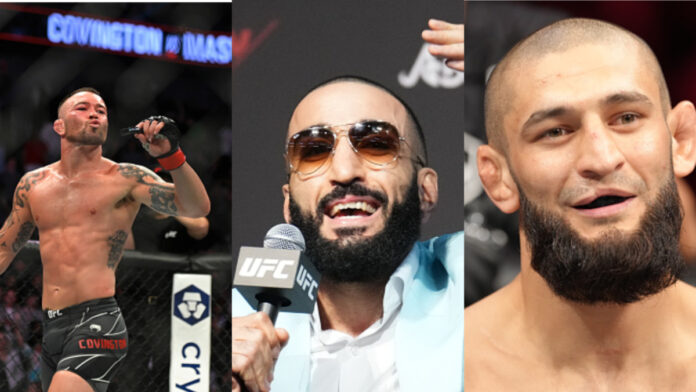 The pre-fight build-up between Belal Muhammad and Sean Brady was real, but at the end of the night, only one man could walk out of the cage victorious. ‘Remember the Name’ gave fans an exact reason to do just that, as he lived up to his promise and finished the Philadelphia native.

During fight week, things began escalating between Muhammad and Brady. At the press conference, things kind of reached their boiling point as both fighters would get pretty angry at one another and essentially promise to knock the other out.

Everybody was on the edge of their seats when it became time to throw down, and the two fighters did not disappoint. After an intense first round, the second began and things really turned into a brawl at the end. Both men stood on their feet, letting their hands fly.

Belal Muhammad would hurt Brady late into the second, and chaos really ensued. The Philly fighter attempted to work the cage and regather his wits, but ‘Remember the Name’ was on a mission. He chased Brady around the octagon, throwing a vicious cocktail of straights, hooks, and uppercuts. Eventually, the referee had seen enough and stepped in to stop the action after a series of particularly brutal blows.

After a monumental performance, Muhammad took the microphone and laid down fire. He boldly called out his next desired opponent and claimed that Colby Covington isn’t really as eager to fight as he may make it out to be.

“I do not think Colby (Covington) is going to be fighting (Khamzat Chimaev in March in the U.K.),” Belal Muhammad began. “Colby’s out here hiding. He’s doing his own little thing. He’s definitely not fighting Khamzat. The people talk about (Covington) like he’s the next big thing, but who has he beaten that’s won?”

“I didn’t see (Chimaev) in the crowd, but I’d like to see him in the cage,” Belal Muhammad continued. “Brother, what happened to ‘Nate Diaz in August, Bully B in October’? I’ll fight you at 179.8. I don’t care about weight. I want to fight the best guys in the world, and I think I’m the best guy in the world, so step into my office.”

Would you rather see Muhammad face Colby Covington or Khamzat Chimaev next?