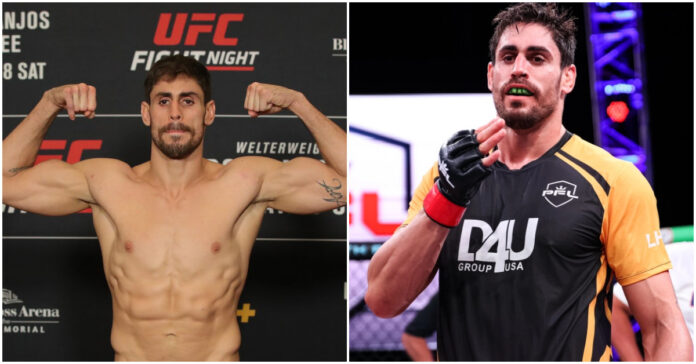 Antonio Carlos Junior appears to be happy about not being with UFC as he claims to have made more money fighting in the PFL.

Joining the UFC in 2014 after winning The Ultimate Fighter Brazil 3, Carlos Junior inked a deal with the PFL in 2021 after being let go by the promotion following three losses in a row. He had a tumultuous start in the organization before going on a five-fight win streak beating the likes of Marvin Vettori, Tim Boetsch, and Jack Marshman between 2016 and 2019.

In an interview with MMA Junkie, Antonio Carlos Junior talked about the differences between being in the UFC and the PFL.

“I didn’t change much, just the numbers got a little bigger on the bank account,” Carlos Junior said. “I think I made in UFC what I paid in taxes this year. The thing is that I had the contract from ‘The Ultimate Fighter’ and it was 10 fights, so it was a lot. That’s what happened to me, you know. I didn’t have a great manager at the time to help me out with this. This cost me a lot of money.”

Carlos Junior seems to be content fighting for the PFL given the financial rewards it has entailed for him. He makes a good point of being on a ten-fight deal. Although he gained some attention by winning The Ultimate Fighter, he was stuck at that same value for the next ten fights which means even if his value rose, he would have no power in negotiating for a better contract.

Antonio Carlos Junior pays in taxes what he made at UFC

Antonio Carlos Junior finished his time at the UFC after suffering back-to-back losses, to Ian Heinisch, Uriah Hall, and Brad Tavares. He then went on to sign with the new promotion and won the PFL’s light heavyweight tournament last year, an achievement that got him a $1 million cheque.

He was matched up with Tom Lawlor for his debut fight in the PFL. Carlos Junior performed well as he dispatched Lawlor with a guillotine choke submission in the closing seconds of the first round. In his second fight with the organization against Vinny Magalhaes, Carlos Junior fought to a no-contest due to an accidental knee to the groin.

In his third fight with the PFL, he defeated 2020 PFL champ Emiliano Sordi with a decision win before following that up with a submission win over Marthin Hamlet. He submitted Hamlet with a rear-naked choke in the first round of the tournament final to claim the million-dollar prize.

Do you think UFC underpays their fighters like Antonio Carlos Junior?