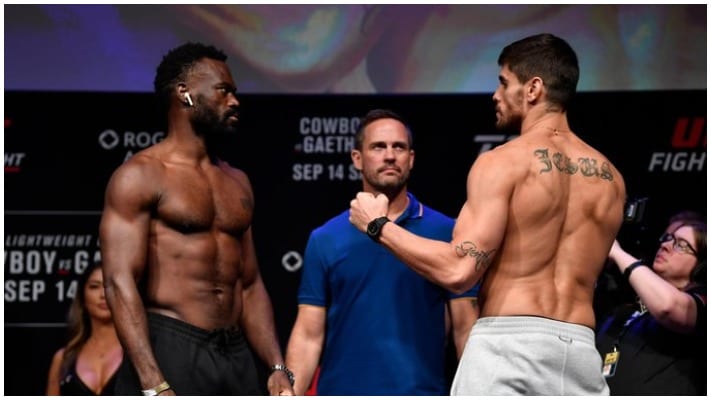 Antonio Carlos Junior vs. Uriah Hall in a middleweight bout continues the main card of the UFC Vancouver event:

Round 1: Junior clinches up with Hall and drags him to the ground. He quickly gets his back and is looking for a rear-naked choke but doesn’t get it as Hall scrambles back to his feet where they exchange strikes. Junior scored another takedown late in the ground where he gets into half guard.

Round 2: For the early part of the first round, they clinched up against the face. Junior in on the double leg and backs Hall to the fence as he slides up into the clinch. The fans started to boo this action. Junior was bleeding heavily from his nose that is likely broken. Hall dropped him with a 1-2 then poured on strikes but Junior went for a triangle choke off his back but Hall stepped out of it. Hall allowed him back to his feet. Junior went in on a takedown but was stuffed.

Round 3: Junior got a takedown right out of the gate and took his back where he worked for a rear-naked choke. He stayed in this post for the entire round while trying to weaken down Hall to get the submission. He didn’t.