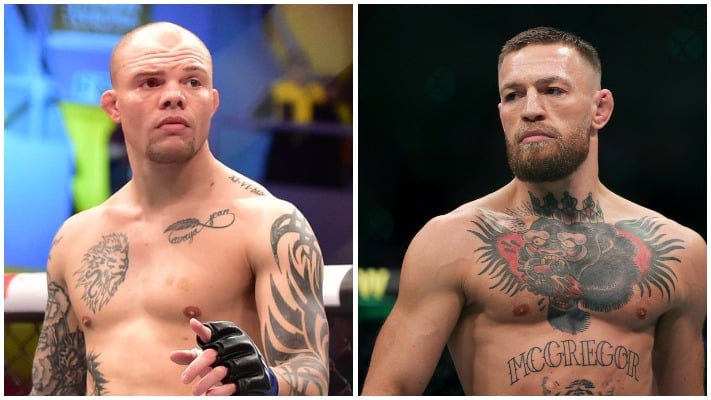 Anthony Smith speculated as to why Conor McGregor decided to troll him recently.

During UFC Vegas 42 last week, McGregor posted a now-deleted video of himself watching the broadcast and particularly laughing at and mocking Smith and Belal Muhammad who were serving as analysts.

“Lionheart” fired back earlier this week and believes he knows why McGregor has continued to mock other fighters over the years on social media.

“This is the second time Conor has come at me,” Smith said on his SiriuxXM show (via Middle Easy). “And this one’s not even my fault and I don’t give a sh*t what Conor thinks of me but I don’t know why he’s taken aim at me twice. But as I thought about it, I think I figured it out — Conor has been uber, uber successful. He’s made more money than he can ever spend…He’s made true, like, generational wealth. His kids’ kids’ kids’ kids are going to be just fine because of the things that Conor’s accomplished.

“What Conor can never get back is he’ll never be one of us again. And it drives him absolutely crazy. He used to be one of us. I found myself sitting at the desk wondering like does Conor miss what it felt like to be in the gym and just be one of the guys? Because he’s alienated himself from everybody.

“I’ve been around him a little bit. I don’t know him but I’ve been around him and he was one of the guys. And he kinda sold out and he starts taking shots at people and he kinda sold his soul for all that money. And that’s fine if that’s what you want to do. But I think sometimes, it’s less about him trying to get a headline…I think it eats him alive that he’s never going to be one of the guys again. He’ll never fit in in our group. He’s not one of our peers anymore. It’s not because we kicked him out and didn’t want him, it’s the total opposite.”

Anthony Smith: McGregor ‘Sh*t’ On Every One Of Us

Whether that’s true or not remains to be seen. However, if McGregor does want back in, the chances are next to impossible according to Smith.

“We wanted Conor [McGregor] to be one of us. He alienated all of us and now he wants back in and we’re not gonna let him in because he sh*t on every one of us…” Smith added. “He wants the whole world to think he’s the cool guy and we’re not when in all reality, in our private situations and in our small world, he’s the outsider.

“He’s the one no one’s letting back in.”

Muhammad hasn’t forgot either as he took the chance to mock the Irishman after UFC Vegas 43 last night.

Do you think Anthony Smith is spot on regarding Conor McGregor?