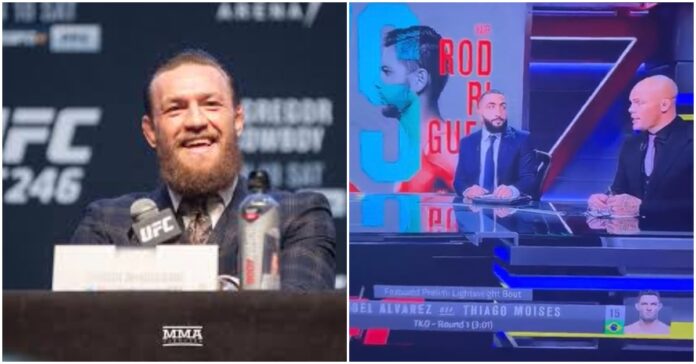 Conor McGregor’s Twitter shenanigans continue as he takes aim at Belal Muhammad and Anthony Smith while they were on the UFC analyst booth.

McGregor took a video of the two fighters breaking down some of the fights for UFC Vegas 42. ‘The Notorious’ posted the video on Twitter, but it has been deleted since. McGregor opens up the video with a cackling laugh before zooming in on Muhammad and screaming “What the f*ck is this?! Get this of my telly!”

To the naked eye, ‘Lionheart’s tie does look very funny and almost comically small. Upon closer look it is a regular tie, just tucked in his shirt.

It seems as if Muhammad didn’t take too kindly to Conor McGregor mocking him.

After the event, Muhammad was asked who he thinks Max Holloway should face next. Muhammad answered by saying he wanted to see Holloway fight McGregor and beat him. He also said he believed that Holloway would beat McGregor pretty easily and show why he is the better boxer.

McGregor was vocal for the entirety of UFC Vegas 42. He was very excited to see Holloway fight tonight as he posted on Twitter about it a few times. Those tweets have also been deleted, but thanks to screenshots we still have them.

McGregor was all over the place again today and has opened the door possibly for a fight against Holloway in the near future. After Holloway’s win over Yair Rodriguez tonight, he reiterated the fact that he is on the short list for a fight against McGregor.

The two met early in their career and resulted in ‘The Notorious’ taking home a unanimous decision win in 2013. Only time will tell what McGregor will do, as he has a lot of possibilities on his plate.

What do you make of Conor McGregor’s antics during UFC Vegas 42?