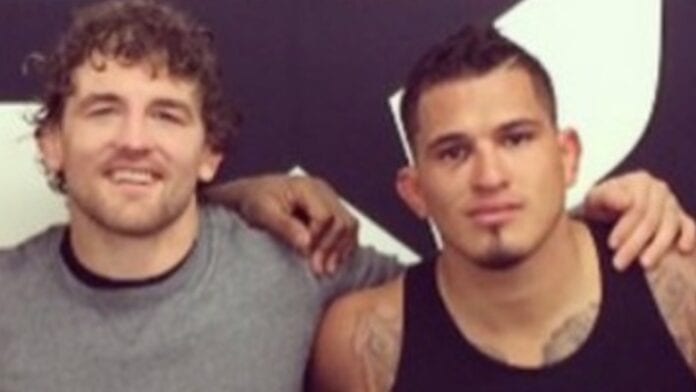 If Ben Askren needs any help for a boxing match with Jake Paul, he can always turn to Anthony Pettis.

Askren is reportedly set to face Paul in a boxing match on March 28. Although nothing is official, the former UFC welterweight hinted it was legit and that he had accepted the YouTuber’s challenge.

Of course, many observers — as well as oddsmakers — are picking Paul to come away with the win due to Askren’s lack of striking prowess.

However, Pettis is looking forward to it and has even offered his assistance to his former teammate.

“I asked him, ‘Yo, are you boxing?’ He was like, ‘Why wouldn’t I?’ He made some good points,” Pettis told SCMP MMA. “I definitely offered my assistance. I love to box, and that’s something I will do before my career ends, I will have a boxing fight, I will have some kind of go in the ring. And to see him get this opportunity man, it’s amazing.

“He’s one of them guys that’s had bad luck in the UFC, a little bad run with Masvidal and Maia. But for him to go out there and box against one of the biggest YouTube stars and potentially be able to shut this guy up, I’m looking forward to it.”

As for Askren’s striking, almost everyone knows it’s lacking, even “Funky” himself. However, one thing that cannot be denied is that Askren is a strong, tough and legitimate athlete as stated by him in a recent video.

And Pettis is in complete agreement.

“I agree with that,” Pettis said. “Ben’s one of the best wrestlers I’ve trained with. And I hit him with some crazy stuff and he’s one of the toughest dudes out here, bro.

“I was probably one of the biggest guys trying to get him in the UFC, because I was like, ‘This guy is world-class’. I was sparring with him on the daily and we’re not too far away in weight classes, but I knew what he can bring to the table.

“If you take away the wrestling and just give him gloves on the hands, that’s why I think Jake Paul is going for a guy like Ben, he has the name but he doesn’t have the hands, but he’s a world-class athlete.”

We’ll have to see if that’s enough to translate in a boxing match.

Do you think Askren has a chance against Paul?