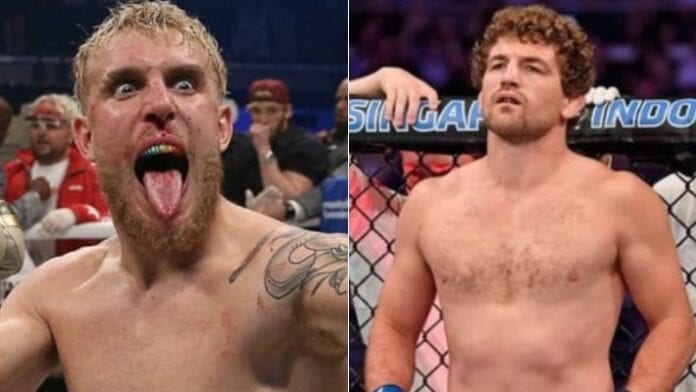 It was recently reported that Askren and Paul would face off in a boxing match set for March 28. Although nothing is official just yet, Askren hinted it was legit and later explained why he accepts the challenge.

“I know you called me out after your fight with that bum Nate Robinson,” Askren said. “Listen, it’s a pretty simple choice. I’m gonna make a whole bunch of money to beat up a guy who is pretending to be an athlete because at the end of the day that is what you’re doing, and I know you may think I don’t have too many standup skills but also at the end of the day I don’t need to.

“I’m a world-class athlete, I’ve won NCAA titles, I’ve been to the Olympics, I’ve won belts in multiple MMA organizations and quite frankly, I am impressed that you’ve diluted yourself into thinking you are actually a fighter, that you are really tough, that you can really box, It’s quite impressive that beating up another YouTuber and beating up a boxer that looks like he’s never been in the ring before makes you good at boxing. So yes, Jake I accept. I will see you March 28 in Las Angeles and I will humble you like millions of people want to see happen.”

Oddsmakers don’t seem to agree, though.

These odds aren’t all that surprising.

While Askren is a world class athlete, he has never been much of a striker at all. When he did strike on the rare occasion — notably against another non-striker in Demian Maia — it wasn’t particularly effective and even became the subject of multiple memes.

Paul, on the other hand, has been training exclusively in boxing for a number of years now and has access to some of the best coaches such as former boxer Shane Mosley as well as sparring partners.

And while he hasn’t faced the best competition, Paul certainly showed he has legitimate skills even from his two professional boxing bouts.

However, those odds are certainly enticing for those who feel Askren will humble the younger Paul brother.

Are you surprised by these odds?