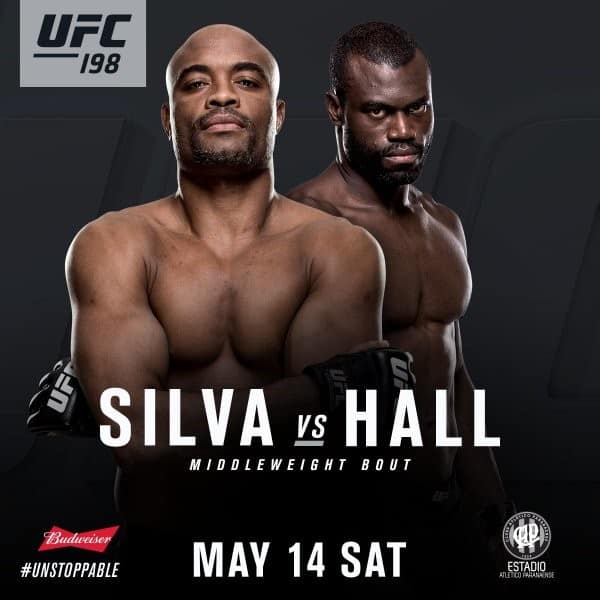 As he burst onto the scene of The Ultimate Fighter (TUF) 18 with an explosive striking skillset, Uriah “Prime Time” Hall was being dubbed as the next Anderson Silva.

Fast forward three years and Hall will actually step into the Octagon with the man he was once compared to, the man many consider to be amongst the greatest mixed martial artists of all-time.

The UFC has confirmed that Silva and Hall will indeed do battle at May 14’s UFC 198 from “The Spider’s” home of Curitiba, Brazil live on pay-per-view.

Despite his illustrious career, Silva has fallen on rough times since losing his title to Chris Weidman at UFC 162 in 2013. He would go on to gruesomely break his leg in the rematch at UFC 168, putting him on the sidelines for nearly a year.

The former champion then returned to action in January 2015, scoring a win over Nick Diaz. That win was later changed to a no-contest, however, after Silva failed a drug test, putting him out of action for yet another year.

Hall, on the other hand, picked up a super impressive stoppage win over former Strikeforce champion Gegard Mousasi last September, but then dropped a short notice decision to Robert Whittaker in November.

A battle between two of the division’s best strikers, Silva vs. Hall is a nice edition to an already compelling card.

Heavyweight champion Fabricio Werdum will put his title on the line against Stipe Miocic in the main event, and top 185-pound contenders Ronald “Jacare” Souza and Vitor Belfort will clash in the evening’s co-main event.