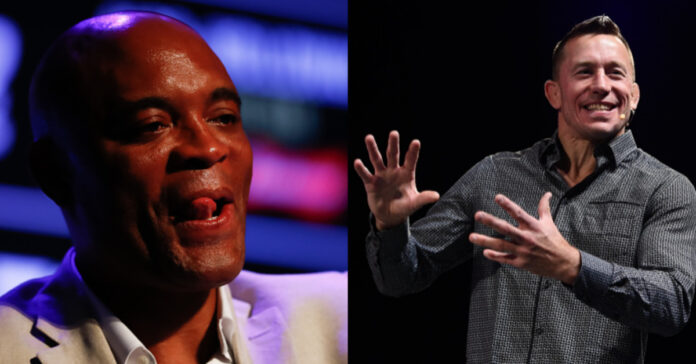 If Anderson Silva gets his wish, fans will be treated to the long-debated dream match between ‘The Spider’ and former welterweight world champion, Georges St-Pierre.

Anderson Silva will step into the squared circle on Saturday night against ‘The Problem Child’ Jake Paul as the two headline a Showtime pay-per-view event. Co-hosting the festivities will be UFC Hall of Famer Georges St-Pierre. Dominating the UFC from different weight classes from 2006-2013, Anderson Silva and GSP are two of the greatest to ever step inside the Octagon.

Competing before the era where super fights and two-division champions were a regular occurrence, fans have often debated over who would have won between the two MMA icons. Perhaps we’ll get an answer to that question after all.

During his appearance at a pre-fight press conference on Thursday, Anderson Silva suggested that a meeting of the two legends could happen inside the squared circle, pending any contractual obligations that GSP may have with the UFC.

“Wow, I think that’s good [on a meeting with St-Pierre in the boxing ring],” Silva said (h/t BJPenn.com). “You know, wow. First of all, you would need to check if GSP is out of the contract with the UFC. Because, I think that GSP could come and do something special same as us, you know. I love it, I love it, it’s so amazing.”

Georges St-Pierre officially retired from the sport in 2019 after capturing the UFC middleweight title at UFC 217. Despite walking away from the sport more than three years ago, ‘Rush’ is believed to still be under contract with the UFC which could prevent him from competing under any other promotion’s banner without consent from Dana White and company. Silva retired a year later, but is no longer under contract with the UFC, allowing himself the opportunity to compete anywhere he chooses.

Since his split from the UFC, ‘The Spider’ has gone on to earn wins inside the boxing ring against Julio Cesar Chavez Jr and former UFC light heavyweight champion Tito Ortiz. He’ll look to make it three in a row against undefeated social media star Jake Paul on October 29th.