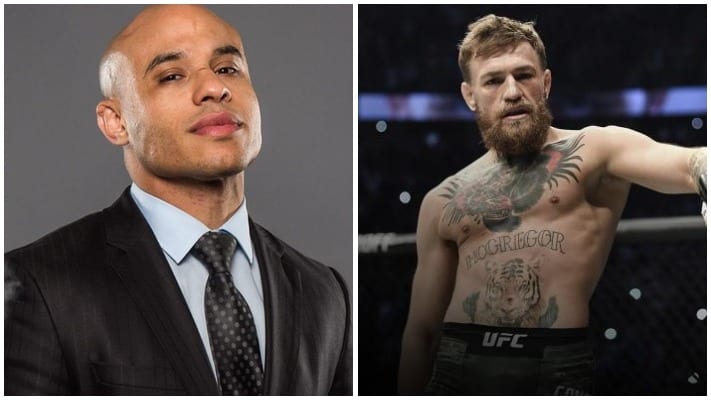 Ali Abdelaziz is sure of one thing — Conor McGregor won’t be fighting for the lightweight title anytime soon.

Nurmagomedov is expected to face Justin Gaethje in a lightweight title unification fight that was set to take place in September. However, it is unlikely that “The Eagle” will be back anytime soon following the recent death of his father Abdulmanap.

Abdelaziz has since claimed that Nurmagomedov will be back before the end of the year to face Gaethje. As for whether McGregor could possibly be inserted into the title picture, Nurmagomedov’s manager was clear as to how the Irishman could possibly get a shot in the future.

“Justin said no (to McGregor),” Abdelaziz told TMZ (via BJ Penn). “Khabib told me to go tell Justin to fight Conor. Justin said no. Listen, we dictate this. Conor right now he can be a backup fighter. He can go make weight and maybe make some money, but at the end of the day, that’s the two champions. He’s not even No. 3, he’s No. 4 or No. 5. Conor can go fight Nate (Diaz) or (Jorge) Masvidal.

For now, McGregor is retired with one of the reasons being the UFC’s resistance in letting him fight Gaethje in the meantime. However, UFC president Dana White wouldn’t be surprised if he returned next year once things start to move again.

It will certainly be interesting to see how things play out then, especially as White’s plan all along was for McGregor to face the winner of Nurmgamedov vs. Tony Ferguson earlier this year.

Do you think McGregor will get a title shot in his next fight? Or will he have to fight some contenders?