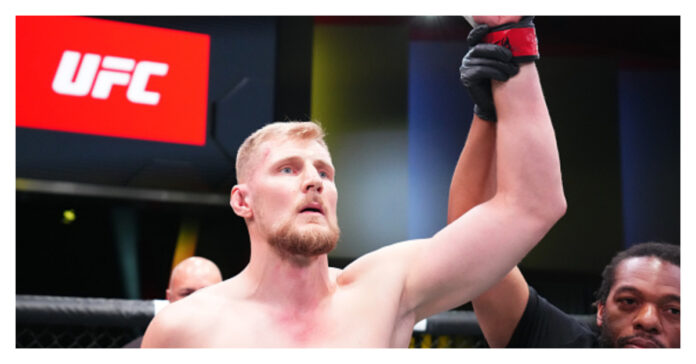 Alexander Volkov scored an impressive first-round TKO against Jairzinho Rozenstruik at UFC Vegas 56 on Saturday, but the win did not come without a little bit of controversy.

Around the two-minute mark of the first round, ‘Drago’ landed a big right that stunned ‘Bigi Boy,’ wobbling the man from Suriname. Volkov unloaded multiple strikes as Rozenstruik began to cover up, looking for a way out of the danger. As Volkov continued to lay on the strikes, Rozenstruik dropped to one knee, prompting referee Herb Dean to step in and stop the bout. Rozenstruik immediately protested the stoppage.

While discussing the fight during the UFC Vegas 56 post-fight press conference, Volkov defended the stoppage believing that had it continued, Rozenstruik would have absorbed more unnecessary punishment.

“In the moment, I hit him, he was a little bit knocked out so he wasn’t being fully fresh,” said Volkov. “Anyway, it was a big opportunity to knock him out, to land because he was almost on the mat. I was ready to throw him down and continue my work.”

After the stoppage, the MMA community immediately began to question Herb Dean’s call. This is far from the first time Dean has been criticized for his decision-making in the Octagon. Dean has often been accused of being indecisive during a potential fight-ending sequence, but Volkov was quick to remind fans that he has no control over the referee’s actions.

Regardless of anyone’s opinion on the stoppage, the win puts Volkov back into the win column after a disappointing performance against Tom Aspinall at UFC London in March.

Intent on working his way to a UFC heavyweight title opportunity, Volkov discussed what may come next. A potential rematch with heavyweight gatekeeper Derrick Lewis is a possibility according to ‘Drago’, but another crack at Ciryl Gane seems to be what the Russian-born fighter is looking for.

“It doesn’t matter for me about revenge or winning other fights,” Volkov explained. “I’m ready for any challenge. Any challenge would be good but maybe I want to rematch with [Ciryl] Gane because this fight was close. With Derrick Lewis, I won all the rounds and then I just took this punch. It was good for him. He was good with his punch, but anyway, I don’t feel this is a big problem for me.

“For me, I like more challenges, and right now, for me, I think that rematch with Gane because I respect him very much, about his stand-up work, about everything, it’s very interesting for me to meet him again. I’m ready for any challenge against any fighters, any time.”

Who would you like to see Alexander Volkov fight next?