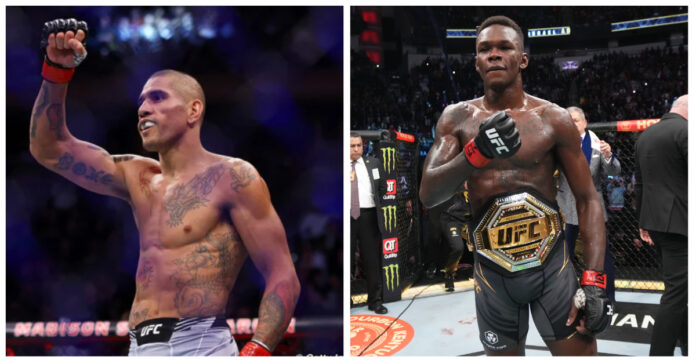 Alex Pereira believes he’ll score another stoppage win against Israel Adesanya if they were to match up once again.

The two men previously fought twice in kickboxing and when asked about the potential third fight between the two, Adesanya warned Pereira, stating: “These ain’t big pillow gloves, these are four-ounce deadly weapons that I can’t wait to drive through your face.”

This prompted a response from Pereira at the UFC 276 media day event.

“Well, actually makes me confused,” Pereira said. “Because with those two fights and the knockout, he actually claimed [the gloves] to be a pillow, but now we talk about four-ounce gloves.”

“It is a deadly weapon, but if the big pillows already make him leave on the stretcher with a balloon on him, imagine what’s going to happen with four-ounce.”

The former two-division Glory kickboxing champion, Alex Pereira, made his UFC debut in November of last year, winning via a flying knee knockout. Since then, he earned a decision win against Bruno Silva, earning some early title shot talks against his former rival, and the current UFC middleweight champion Israel Adesanya.

In the first fight between the two, Pereira won a close, debated decision, but in the second fight, he famously left Adesanya unconscious after hitting him with a clean left hook, which happens to be one of Pereira’s most deadly weapons.

But for now, Alex Pereira is set to face Sean Strickland (25-3) at UFC 276. Strickland is riding a six fight win streak so Pereira will have his hands full trying to extend his undefeated UFC record. While in the main event of UFC 276, we have the Middleweight Champion, Adesanya, defending his belt against Jared Cannonier.

The placement of Alex Pereira on this card is a pretty clear indication that if he can beat Strickland, and Adesanya can defend his belt against Cannonier, then we might get to see these two rivals fight for the first time in MMA where Adesanya believes he’ll be able to right all wrongs but Pereira sees another stoppage win in his future.