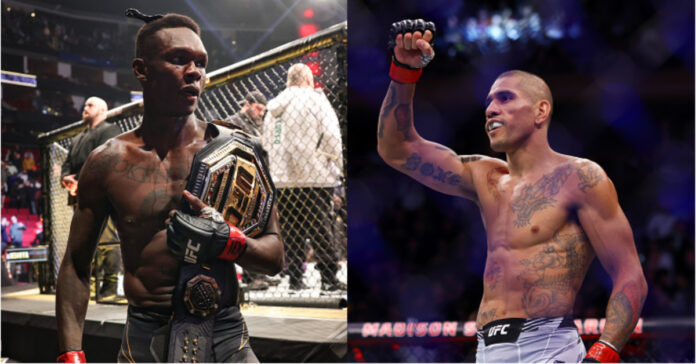 With a win at UFC 276, Alex Pereira could find himself in the position for a middleweight title fight against reigning champion Israel Adesanya.

While speaking to Yahoo Sports, UFC president Dana White talked about Pereira’s upcoming bout with Sean Strickland and suggested that if ‘Poatan’ is victorious, a fight with Adesanya “makes a lot of sense.”

“I mean, both these guys came from Glory Kickboxing. Pereira is a former double champion there — middleweight and light heavyweight. He’s got two wins over Israel Adesanya,” said White. “And, you know, he’s got two wins in the UFC right now. So taking on tough, durable, nutty Strickland, which should be a damn good fight. And if he wins, it makes a lot of sense to do the Adesanya fight.”

Pereira faced Adesanya in the Glory kickboxing promotion on two separate occasions. Their first meeting was at Glory of Heroes 1 in April 2016. Pereira won the bout via unanimous decision. Their rematch came at Glory of Heroes 15 almost one year later. Pereira put an exclamation point on the rivalry by knocking out Adesanya.

To this day, Alex Pereira is still the only man to knock out Adesanya in combat sports.

“If Pereira can win this fight, [it] puts him in a very fun fight with [a] great storyline against Adesanya,” said White.

Before ‘Poatan’ and ‘The Last Stylebender’ can meet in the Octagon, both fighters have some business to attend to at UFC 276 on Saturday. Alex Pereira faces the ever-controversial Sean Strickland on the evening’s main card. Currently ranked No. 4, Strickland is riding a six-fight win streak and looks to secure a title opportunity with a win over Pereira.

In the main event of the evening, Adesanya will defend his title against the No. 2 ranked contender Jared Cannonier. Winner of five of his last six, Cannonier earned his opportunity with an emphatic win over Derek Brunson at UFC 271.

“If you look at these two, both guys are knockout artists. Both guys have huge power,” said White. People don’t– for some reason, people don’t give Adesanya the credit for the knockouts. This guy’s got 15 wins by knockout. Cannonier has got 10 wins by knockout.”

“Both guys have been criticized about their wrestling. You know, Cannonier has worked on his wrestling over the last couple of years. Stylistically, I see this as a gunfight, man. I think these two are gonna come in and start blasting each other. And this should be a very fun main event. And Adesanya, you know … he loves the belt and what it’s done for him. It’s obviously made him money and lots of other things. He’s looking for highlights now. He wants to just start finishing people with incredible finishes. So it’s got incredible written all over it.”