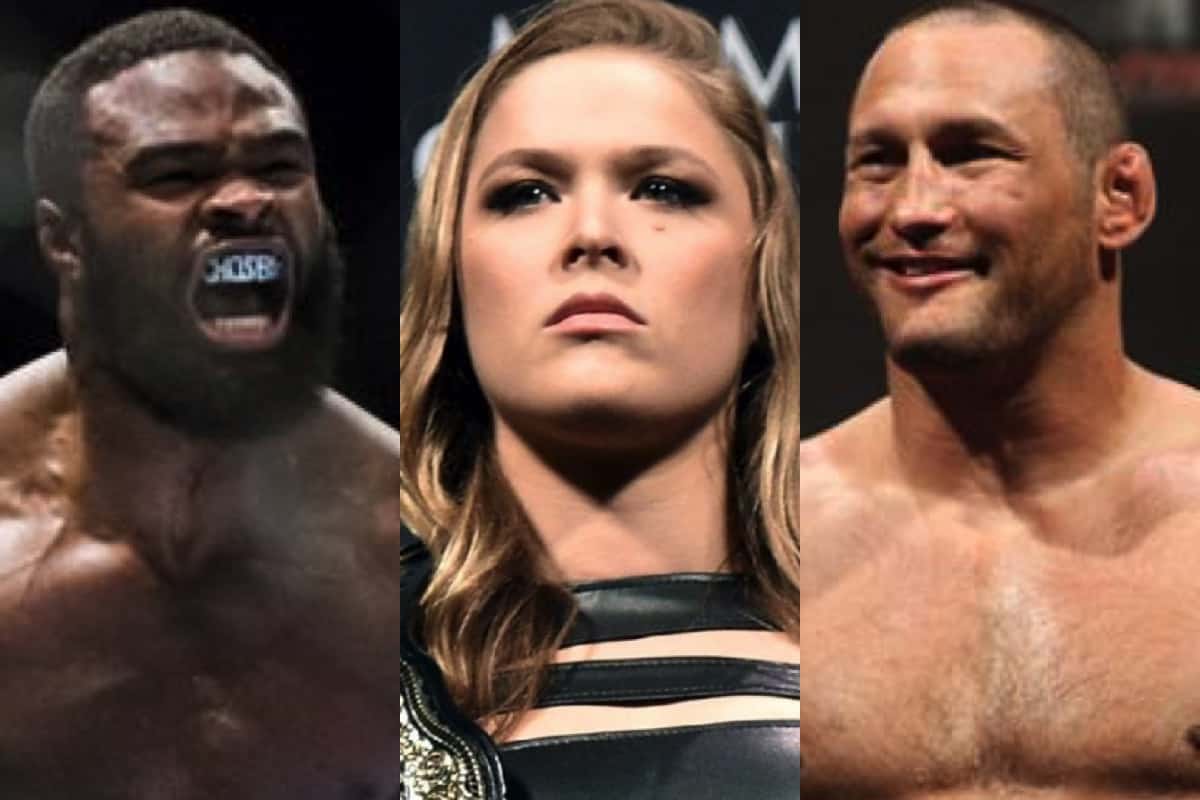 The UFC is quickly building a roster of stars who are crossing over into Hollywood in a big way.

It seems as if each and every week we hear or see a fighter on a famous TV Show, movie, or other form of major entertainment stage.

From Ronda Rousey making an appearance at Wrestlemania, to UFC golden boy Conor McGregor starring in the latest installment of the Call Of Duty franchise, the UFC is steadily starting to take over the entertainment section of the world along with sports as well.

Prior to the Conor McGregor‘s and Ronda Rousey’s of the world, however, some other UFC combatants have also kicked ass on the big screen as well.

With that said, let’s take a look at our top 10 UFC fighters who threw down in movies….. 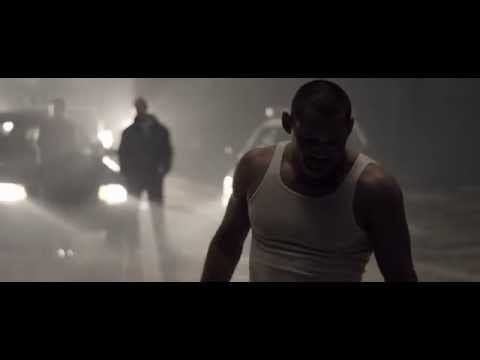 We kick off our list with the former Pride Champion who will be competing this weekend for his first career UFC title, when he takes on Michael Bisping in the main event of UFC 204 for the 185-pound title.

Henderson, a two-time UFC title challenger, is one of the most hardest hitting men to have ever stepped inside the Octagon, and he took his hard hitting punches to the big screen.

Before he looks to shut Bisping’s lights out again to take home the gold, as he did at UFC 100 in their initial meeting, Henderson did in fact dabble in the acting business as in the middle of his MMA career.

While Henderson has made a couple of TV Show appearances in shows such as The King Of Queens and Cubed, he made his big screen debut in the 2012 film Dragon Eyes where he viciously beat a police officer:

In the scene Henderson repeatedly beats an officer by smashing his face in with punches, bringing back memories from the officer’s past and most likely doing some severe brain damage as well. 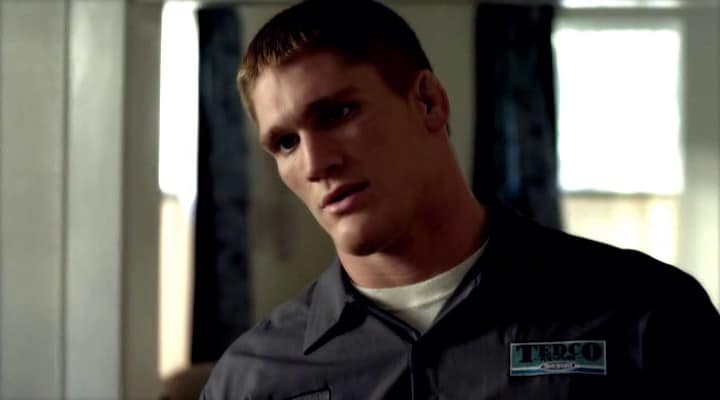 Todd Duffee is one of the hardest-hitting heavyweights in the UFC. While he may be coming off of an unfortunate first round knockout loss at the hands of former UFC heavyweight champ Frank Mir, he did kick some ass on the big screen not too long ago.

Duffee made his first and only appearance in film when he co-starred in the film Never Back Down 2: The Beatdown.

Duffee played Tim Newhouse, a viciously talented mixed martial artist (MMA) who has to deal with losing his father and deal with poverty at the same time.

Newhouse was supposed to compete in the underground MMA tournament called The Beatdown but he is ambushed in a bathroom and eliminated from the tournament: 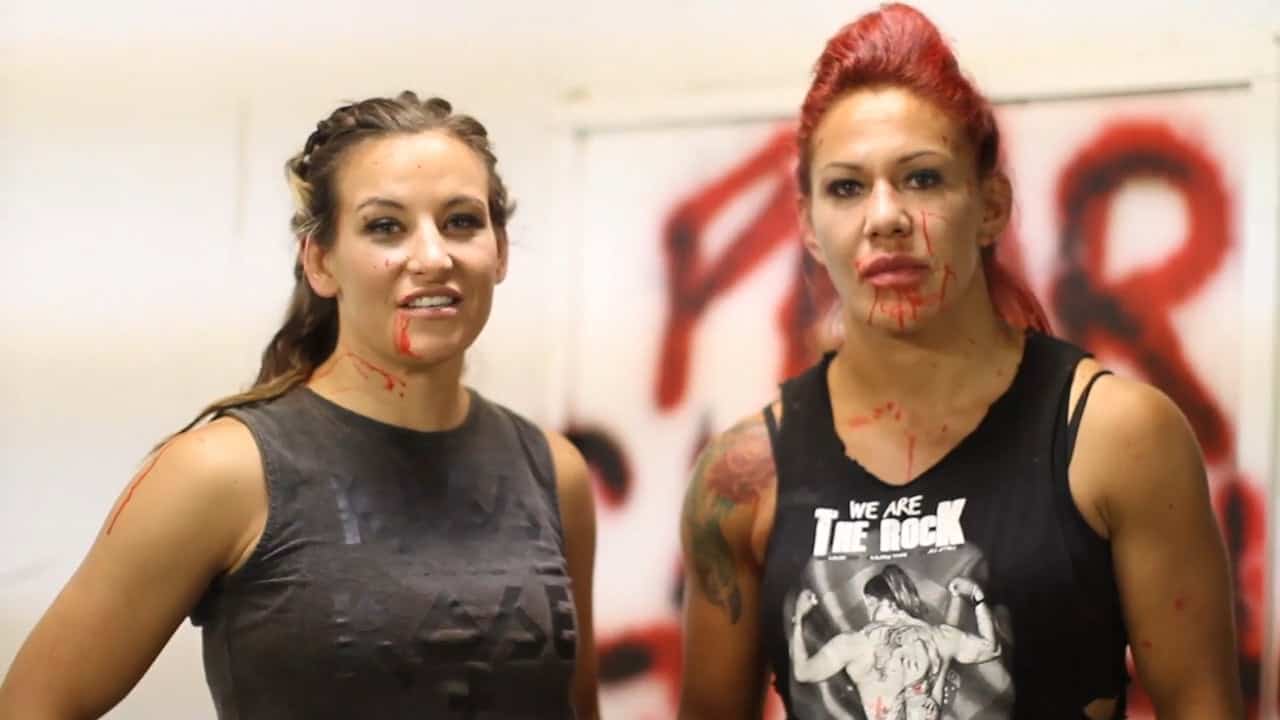 Arguably the most feared woman on the planet today, Brazilian powerhouse Cris ‘Cyborg’ Justino is just getting her name out into the MMA world after having competed in the UFC’s Octagon twice now.

The former Strikeforce champ, and current Invicta FC featherweight champion has left a trail of unfortunate souls in her path to the UFC, now having made quick work of both women who have met her under the UFC’s banner.

While Justino has yet to scrap with the elite of the UFC’s female roster, she did throw down alongside former champions Holly Holm and Miesha Tate in the film Fight Valley.

Unfortunately we can’t show you a scene from Cyborg’s role in film, but you can check out a behind-the-scenes clip with the Brazilian champ here: 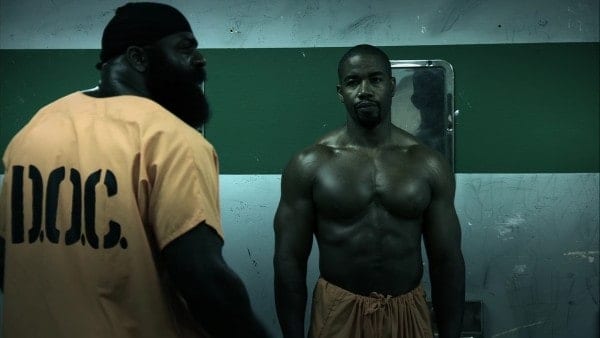 The late, great Kimbo Slice will always be remembered as one of the pioneers of MMA, coming from nothing and fighting on the streets for people’s entertainment on YouTube, to fighting under the biggest promotional banner the sport has ever known, to making a name for himself on the big screen.

After a brief run with the UFC, including a role on The Ultimate Fighter: Heavyweights Season where he was coached up by Quinton ‘Rampage’ Jackson, Slice departed to have a successful career under the Bellator MMA banner.

Slice’s name only got bigger after competing in the world of MMA, and the former YouTube star used his newfound name to land some roles on TV Shows and movies as well.

He would then land his first major movie roll in the film Blood and Bone, in which he played the role of J.C. a prison gang leader who made the unfortunate mistake of attacking the main character Isaiah Bone; and it doesn’t end well for Kimbo and company:

After the movies credits, Kimbo and his gang return once more, but this time it’s to insert his prison shank into a fellow inmates not-so-friendly place:

Former UFC women’s bantamweight champion Holly ‘The Preacher’s Daughter’ Holm is one of the baddest women on the planet.

Holm is most notably known in the MMA world for dethroning former 135-pound queen Ronda Rousey in their main event clash at UFC 193 last November, however, she has since lost the bantamweight strap and is currently riding a two-fight losing skid.

The Jackson-Wink product was known as one of the most dangerous female kickboxing practitioners in the world, holding a stellar record of 33-2-3.

During her days in the squared circle, Holm made her first appearance in front of a camera on a 2010 episode of Knockout: Sportsworld as herself.

She then co-starred in the film Fight Valley alongside some of the UFC’s most feared women, and she kicks ass: 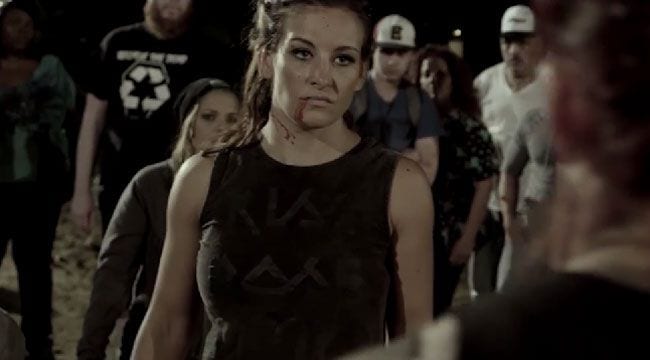 Speaking of Holly Holm, we now move on to the woman who ended Holm’s short reign as champion, Miesha ‘Cupcake’ Tate.

Tate is a pioneer of women’s MMA, who has fought and beaten some of the best competitors the sport has to offer over the span of her near decade-long combat sports career.

Tate’s five-fight win streak since losing to Ronda Rousey in 2013 came to an end when she dropped her title to Amanda Nunes in the main event of UFC 200 this past July, but she did get the chance to cash in on the opportunities that come along with being champion with her role in Fight Valley.

Tate co-stars in the film along with Cris ‘Cyborg’ and Holly Holm, and you can check out a clip from her performance in the film here:

She is currently slated to take on Raquel Pennington at UFC 205 in her next bout inside the Octagon. 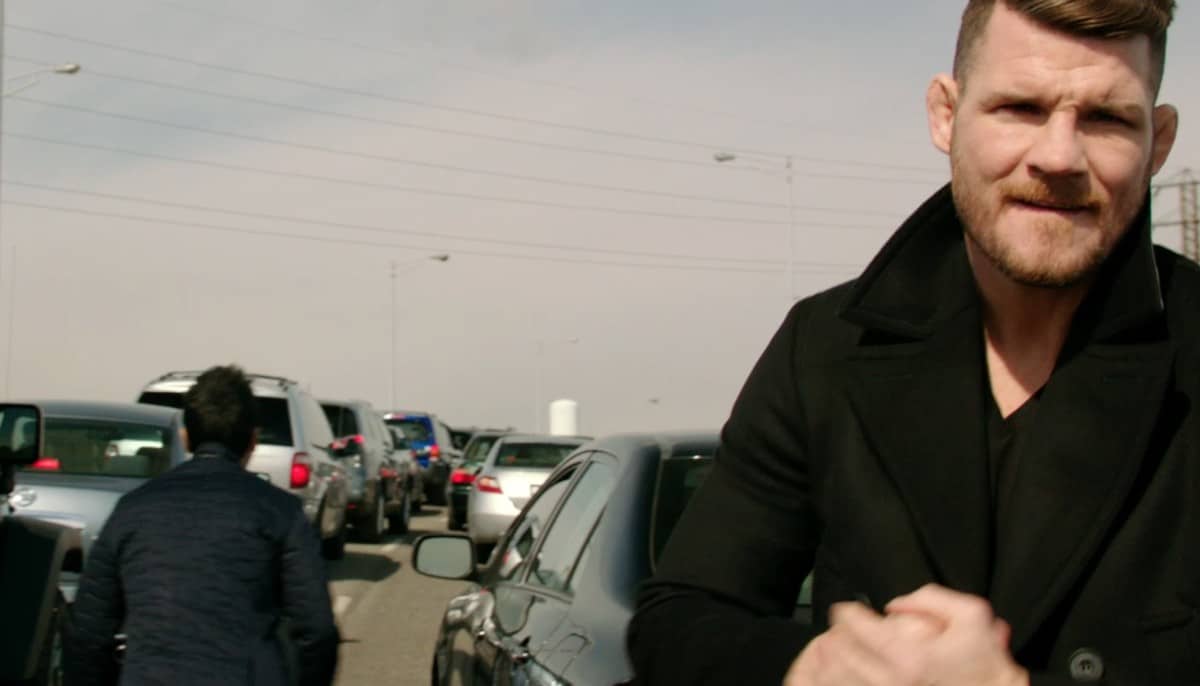 We mentioned his opponent Dan Henderson earlier in our list, but lets now talk about the middleweight champion of the world, who will be defending his 185-pound title against ‘Hendo’ at UFC 204 this Saturday, Michael Bisping.

Bisping is a a 12-year veteran of the sport who is coming off of the biggest win of his career when he knocked out Luke Rockhold in the main event of UFC 199 to secure his first UFC title in his 10-year career under the promotion’s banner.

Bisping will be taking on the role of Hawk, a role originally planned to belong to Conor McGregor before he decided to drop it in order to prepare for his rematch with Nate Diaz.

‘The Count’ will co-star alongside names such as Vin Diesel, Samuel L. Jackson, and Brazilian soccer star Neymar: 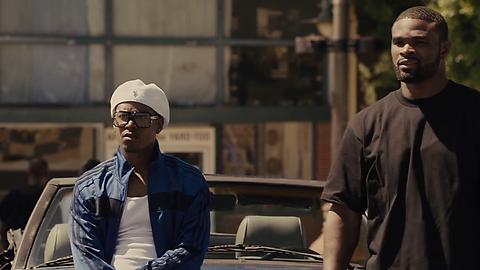 Another UFC champ who is no stranger to being involved in Hollywood films, is UFC welterweight champ Tyron ‘The Chosen One’ Woodley.

Woodley is coming off of a vicious first round knockout over former champ Robbie Lawler in their main event clash at UFC 201, in which Woodley secured his first career UFC championship.

Prior to getting his first taste of UFC gold, however, Woodley got his start in front of a camera in a 2010 episode of Bully Beatdown.

He then again made an appearance as himself in the film Fight Life in 2013, before landing the biggest role of his acting career with a part in the major film Straight Outta Compton in 2015 as the character T-Bone.

Woodley was also offered a villain role in the new upcoming Spiderman film, however, he decided to turn the opportunity down.

Unfortunately we can’t show you a clip from Woodley’s appearance in Straight Out Of Compton, but you can check out the trailer for the film here: 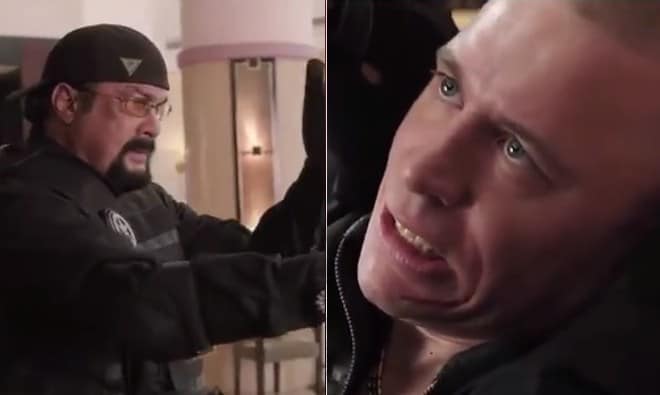 Former UFC welterweight king Georges St-Pierre is no stranger to spotlight. In Canada St-Pierre is known as a national icon and one of the biggest stars the country has ever produced.

After ruling the UFC Octagon in the 170-pound weight division, ‘GSP’ decided it was time to hang up his gloves for a bit and take on the stars of Hollywood instead.

St-Pierre has had some experience in film with his debut being in 2009 when he played a Shaman on Death Warrior, and then himself in the 2009 film Never Surrender alongside many other big named UFC stars at the time.

‘GSP’s’ biggest role to date, however, was as Georges Batroc in Captain America: The Winter Soldier in 2014. St-Pierre and the Marvel hero engaged in an epic fight scene, but the Shield proved to be too much for the former UFC champ to handle.

He also engaged in an epic fight scene with the great Steven Seagal in Kickboxer: Vengeance, in which St-Pierre was ultimately left bleeding out on the floor like a stuck pig after Seagal jammed a knife into the Canadian’s neck: 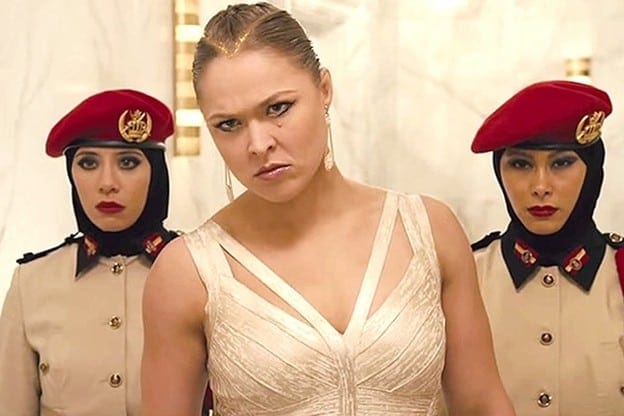 Of course she’s number one, who else did you expect?

Ronda Rousey is arguably the biggest star the world of MMA has ever produced, as her ability to kick butt and look good while doing it have earned her endless opportunities to make big money outside of the Octagon as well.

While ‘Rowdy’ dominated the UFC’s women’s bantamweight division, having finished fights in as quick as 16 seconds, Rousey would make her big screen debut in The Expendables 3 co-staring alongside action movie stars Sylvester Stallone, Jason Statham, Jet Li, and more.

She then would land a role in the blockbuster Hollywood franchise Fast And Furious in Furious 7, in which she played Kara and took part in an epic fight seen with Michelle Rodriguez.

Rousey also co-starred in the 2015 film Entourage in which she played herself as one of the main character’s love interests. She also showed off her skills in the cage in the following scene:

Although she may no longer be undefeated in the Octagon, Rousey still has plenty of film offers lined up as she is slated for three more films, playing the lead in two.