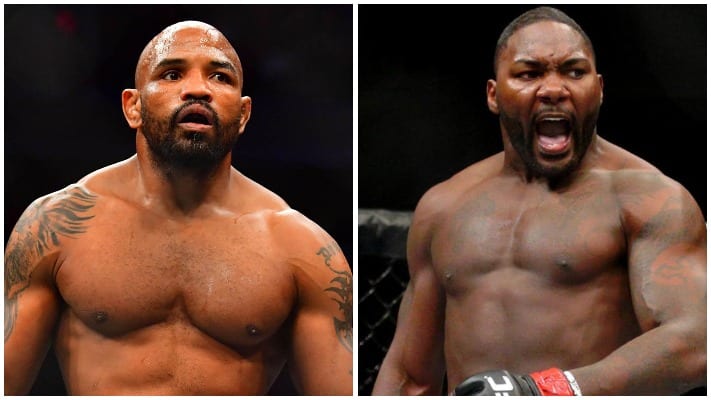 Yoel Romero has revealed there is a “90 percent chance” he will fight Anthony ‘Rumble’ Johnson in his Bellator debut.

Romero was released from the UFC a few weeks ago after losing three straight fights against elite level middleweights. The 44-year-old was originally passed up by Bellator but in a shock move they decided to sign him soon after.

Johnson has also recently joined the Bellator light-heavyweight division after mutually agreeing to part ways with the UFC. ‘Rumble’ is expected to return to fighting in the first quarter of 2021 after several years in retirement. He last fought in April 2017 versus Daniel Cormier in Buffalo at UFC 210.”

In an interview with Ariel Helwani of ESPN, Yoel Romero revealed via a translator that a fight between him and Johnson is highly likely for his Bellator debut.

“To throw a name out there right now is pure speculation…but there’s a huge possibility, 90% chance that [Anthony Johnson] will be the first one to face Yoel Romero.”

Romero last fought in March, when he fell to a decision defeat against UFC middleweight champion Israel Adesanya. Prior to that Romero suffered a split decision loss to top contender Paulo Costa and once again fell short in a UFC title bid against Robert Whittaker.

Before retiring in 2017, Johnson was one of the most feared knockout artists in MMA. ‘Rumble’ fell short in his lone UFC title bid against Daniel Cormier but holds several high profile wins over the likes of Alexander Gustafsson, Jimi Manuwa, Glover Teixeira, Phil Davis and Ryan Bader.

Do you want to see Yoel Romero vs. Anthony Johnson?