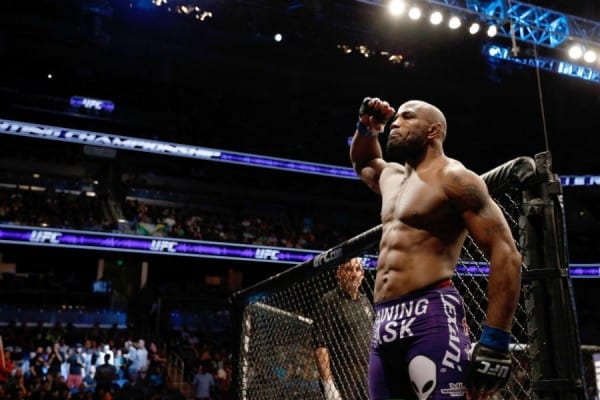 Ever since his controversial UFC 178 win over Tim Kennedy, no. 6–ranked middleweight Yoel Romero has experienced a frustrating sequence of setbacks.

His UFC 184 bout with top contender Ronaldo ‘Jacare’ Souza was delayed due to his opponent having pneumonia, and the subsequent rescheduling at April 18’s UFC on FOX 15 was unfortunately scrapped when Romero injured his knee in training.

That streak will hopefully finally come to an end when Romero battles former light heavyweight champion Lyoto Machida in the main event of June 27’s The Ultimate Fighter (TUF) Brazil 4. ‘The Soldier of God’ will seek to defeat Machida and move on to a potential title eliminator bout (though nothing is guaranteed), as time could soon running out on the 38-year-old Olympic silver medalist wrestler from Cuba.

Because of that, Romero is looking to get his shot at division champion Chris Weidman soon, and if he does, he believes it’s a wholly winnable fight. He recently told Submission Radio through his manager and translator Heber that Weidman is beatable and he’d give himself an even shot at unseating the surging champ:

“He applauds him [Chris Weidman] for being such a great champion, but of course he’s beatable.”

Romero also wants to move on past his feud with Jacare that never happened and understandably advance to a title shot, something that may not be possible without proving himself against the dominant Brazilian jiu-jitsu wizard:

“If he doesn’t get to fight Jacare, it doesn’t matter to him. His goal is to be a UFC Champion.”

That’s an admirable goal that could soon be in reach for the talented Romero, who is undefeated in the Octagon since making his UFC debut in April 2013. Yet with the next title shot going to Luke Rockhold and the next one after probably going to Jacare, Romero may have to hope he can beat Machida and then beat Souza when he returns from a knee injury suffered in his quick UFC on FOX 15 co-main event win over Chris Camozzi.

Otherwise, ‘The Soldier of God’ could be left out of the title picture in one of the most stacked divisions in all of the UFC.