LowKickMMA.com
Home UFC News Yair Rodriguez On BJ Penn Training At Jackson-Wink: I Don’t Give A... 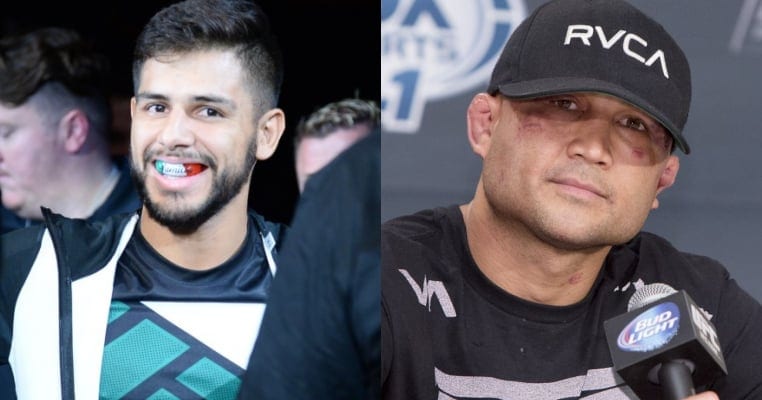 As a potential future star of MMA, 24-year-old former The Ultimate Fighter (TUF): Latin American winner Yair Rodriguez will look to continue his rise up the featherweight ranks when he puts his undefeated Octagon record on the line against returning former two-division champion BJ “The Prodigy” Penn in the main event of this weekend’s (Jan. 15, 2016) UFC Fight Night 103 from Phoenix, Arizona.

Many have doubted Penn leading up to his return bout based on the fact he hasn’t competed since 2014 and hasn’t won a fight since 2010. However, the former lightweight and former welterweight champion is training under the tutelage of legendary coaches Greg Jackson and Mike Winkeljohn, which could help to revive his career.

Rodriguez has actually spent time at Jackson-Winkeljohn as well, although he isn’t worried about his training secrets being leaked to “The Prodigy”. In fact, Rodriguez recently told Ariel Helwani on The MMA Hour that he doesn’t give a ‘f*ck’ about it:

“He’s been training with people that know me really well and are my friends — ‘Cowboy,’ Diego Sanchez, ‘Magician,’ Jackson, ‘Wink,’” he said. “All of those guys can easily tell him where I’m good at … and not. I don’t really care, I’m a fighter and you have to worry about me at any area of the fighting game. I can wrestle, I can strike and I can grapple and I really don’t give a f*ck.

It has indeed been a few years since Rodriguez spent time at the notorious gym in New Mexico, and although he now trains at Valle Flow Striking in Chicago, he says there’s no hard feelings between him and Jackson.

Do you feel is Rodriguez will continue to shine, or will Penn get back to his winning ways?