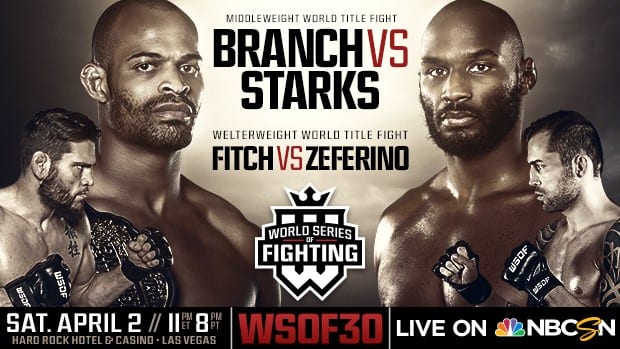 It was once again fight day here at LowKickMMA, and the talent on display tonight (Saturday, April 2nd, 2016) will come from WSOF 30. Headlining the card are David Branch and Clifford Starks, but there’s a whole bunch of great fights also taking place on the rest of the main card.

David Branch and Clifford Starks met in a middleweight title bout in the main event. Starks was trying to keep the fight in the clinch while Branch just wanted to take the fight to the ground and the two struggled over that. In the end of the second round, Starks went for a guillotine choke but couldn’t finish the fight with it. Branch would then dominate the laster rounds with his ground and pound and control. Branch was awarded the decision victory and is still the middleweight champion.

Jon Fitch and Joao Zeferino met in a welterweight title bout. The story of the first two rounds were that Zeferino was trying to keep the fight on the feet while Fitch was trying to get the fight to the ground. Fitch found success with his ground game in the third and later rounds. Complete domination by Fitch. Fitch won the fight by decision and is the new welterweight champion.

Jake Heun and Vinny Magalhaes met in a light heavyweight bout. Heun was the more aggressive fighter in this fight. The first round saw a stand-up fest. In the second round, Magalhaes took him down and worked him over with strikes. In the third round, Magalhaes was looking to finish the fight on the ground by submissions but Heun kept up his defense and fired back with strikes to end a strong round. Magalhaes won the fight by decision.

Opening the main card on NBCSN was Abu Azaitar vs. Danny Davis Jr. in a welterweight bout. Both men come out on fire. Azaitar controlled the first round with his striking. In the second round, Davis Jr. took him down and worked him over with strikes. Very good grappling and control by Davis. Azaitar would rebounded and showed off some good ground skills. At one point, he had back mount in. In the third round, The pace slowed down until the end of the round when Davis took him down and ended the round in back mount. Azaitar was awarded the unanimous decision.