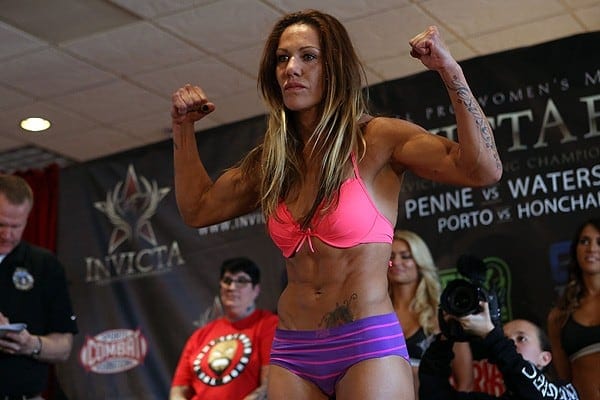 Much has (obviously) been made about Invicta featherweight champion Cris ‘Cyborg’ Justino’s well-documented plans, or lack thereof, to cut down to 135 pounds for a proposed superfight with UFC women’s bantamweight champion Ronda Rousey.

Cyborg was reportedly well on her way to making the weight late last year, but nixed the plans when supposed concerns about her health and future ability to have children arose.

Yet ‘Rowdy’ believes that Justino’s constant request for a catchweight bout is due to an entirely different set of circumstances altogether, as her test failure for steroids in a late 2011 Strikeforce bout has painted her as an abuser of performance-enhancing drugs (PEDs), at least in the UFC champion’s mind. Rousey has repeatedly stated her stance that if Cyborg can make 145 ‘pumped full of steroids,’ then she can most assuredly make 135 without them.

While the Brazilian bruiser has passed all drug tests since her Strikeforce failure, that’s a stigma that doesn’t seem to be going away anytime soon. And Cyborg isn’t doing herself any favors by walking around at a massively muscled 170-175 pounds.

She recently filmed scenes of the upcoming Fight Valley movie with top-ranked UFC women’s bantamweight Miesha Tate, and judging from a photo on Instagram, Cyborg isn’t even close to making the weight:

However, making bantamweight is the only thing she can do to get her coveted fight with Rousey, a fighter who cuts a ton of weight herself and reportedly walks around at 160-165 pounds. That much has been made clear by the unrelenting Rousey and her boss, UFC president Dana White. With no catchweight apparently on the horizon, it would appear that Justino simply has to make the drastic cut to sign on for the biggest fight of her life.

While it’s completely justified that Rousey doesn’t want to make special concessions for a challenger, the bottom line is that if Cyborg is forced to cut down to bantamweight for the fight, we just aren’t going to see even close to the best version of her, and that’s the only version that would potentially give Rousey competition where so many other women have failed.

That’s not to stick up for Cyborg’s perceived steroid use, quite the opposite, in fact. Her insistence on having a huge size and strength advantage on her opponents may ultimately ruin what could be by far the biggest payday of her life, and if that is because of steroids, even in part, then it’s on her for squandering the greatest opportunity available in women’s MMA.

If she can make it, however, then we’ll most likely see a drawn-out, dehydrated Cyborg with less stamina and punching power than ever. Perhaps she can safely get down to the weight with the help of famed nutritionist George Lockhart, but it’s not exactly a likely outcome.

Precious few MMA fighters have spoke up about this aspect of the fight, UFC flyweight champion Demetrious Johnson, who has been surprisingly more vocal heading into his rematch with John Dodson at this weekend’s UFC 191, spoke up during a recent media luncheon in Los Angeles this week (via MMA Fighting) to give his take that a Rousey vs. Cyborg fight at bantamweight just wouldn’t deliver on the massive hype:

“”The Cyborg and Ronda Rousey fight, Ronda is like, ‘I’ll fight you at 135,’ Johnson said. “If [Cyborg] made 135, and granted, she did the drugs and that’s in the past and she’s a big woman from doing that, but her making 135 pounds, it wouldn’t be the same Cris Cyborg as at 145. When people get pumped up at the fight, I can’t get pumped up,” Johnson said. “”Because it’s not going to be the same Cris Cyborg at 145 that’s going to be all drained, especially without an IV, to me, that’s garbage.””

Most of those on the side that believes Rousey is ducking Cyborg would suggest that this is the main reason that ‘Rowdy’ will only accept the fight at 135 pounds; so she can face a depleted Justino who is nowhere near her usually bulldozing and ultra-powerful self.

There’s no need for a champion to make concessions for a challenge; that is, unless she wants to prove beyond a shadow of a doubt that she is the world’s best female fighter by a long shot. Rousey appears unwilling to give in, and that’s understandable. However, ultimately she just wouldn’t face the most optimal Cyborg, which would undoubtedly lead to more asterisks in the minds of some fans.

She certainly might be able to defeat Cyborg at her best, but we just won’t know that’s for sure until she fights a Cyborg that hasn’t turned into a dehydrated skeleton (without the use of IVs, mind you) in order to fight.

Does that mean that Rousey should give in and agree to fight Cyborg at 140 pounds? No, not at all.

But if she wants to beat anything close to the best version of her, then she may have to. With that seeming like a near impossibility, fans may not ever get to witness what would certainly be the best WMMA fight of all-time.

And that would just be a shame.