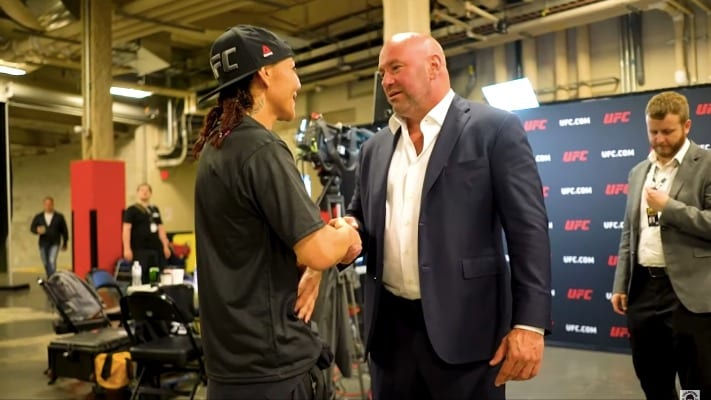 If she ultimately decides to leave the UFC and sign with a new promotion, it would be disappointing to not see Cyborg rematch Amanda Nunes before she leaves. The pair first fought back in December at UFC 235, where Nunes walked through Cyborg in under a minute via knockout.

The victory earned “The Lioness” the 145-pound championship. Much back-and-forth between Cyborg and UFC President Dana White was made as to why an immediate rematch didn’t come to fruition. Dana White went as far as saying Cyborg is scared to fight Nunes again, while Cyborg claims she texted White for the rematch immediately after the first fight ended.

At UFC 240 this past weekend, Cyborg was able to confront White on his comments. She documented their face-to-face meeting on her official YouTube channel. Check it out below.

White has said that he’s open to inking Cyborg to a one-fight deal in order to make the rematch happen. However, should Cyborg beat Nunes and regain the championship, there is a championship clause in UFC contracts that would keep Cyborg under contract with the Las Vegas-based promotion.

The situation is certainly an interesting one, and it will be intriguing to see how things play out over the next few months.

What do you think about Cyborg confronting White backstage at UFC 240?