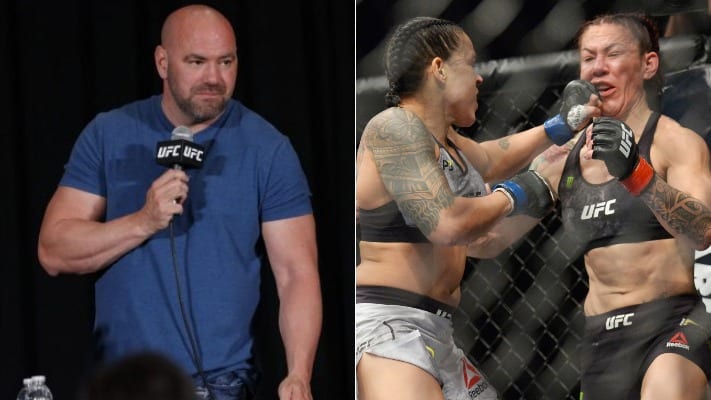 UFC President Dana White and Cris Cyborg are not on the best of terms at the moment. Their already rocky relationship began to unravel when Dana White initially claimed Cyborg turned down a rematch with Amanda Nunes.

However, Cyborg had been openly asking for a rematch with “The Lioness” almost immediately after her first-round knockout loss to her fellow countrywoman back in December. In a recent interview, White suggested Cyborg is “afraid” to step back into the Octagon with Nunes, comments the former 145-pound champion didn’t take too kindly to.

Speaking at a recent media scrum, White doubled down on his comments, noting he’s not saying anything negative about Cyborg. He claims he is simply speaking fact – Cris Cyborg does not want to fight Amanda Nunes again (via MMA Junkie):

“I have no problem with Cris. I said many times earlier when she first came in there were obviously some things we had to squash and fix, and I thought we had done that. I’ve had a decent working relationship with her. Believe me, I’ve had much worse.

“I have no ill will toward her, and when I say she doesn’t want to fight Amanda, and I say that I don’t blame her, I’m not talking about her or being negative toward her. These are facts. Amanda Nunes wants to fight Cyborg. We want to make an Amanda Nunes vs. Cyborg fight. Cyborg does not. That’s a fact.”

Cyborg will compete this weekend at the UFC 240 pay-per-view (PPV) in Edmonton, Alberta, Canada. She takes on 145-pound prospect and former Invicta FC champion Felicia Spencer. The bout will be the last on Cyborg’s current contract with the UFC. Many within the mixed martial arts (MMA) community believe there’s a strong possibility Cyborg finds a new promotion once her deal is up. Especially given her relationship with White.

However, White is willing to make a rare deal to make sure a Cyborg vs. Nunes rematch happens before it comes to that. He stated he’s opening to signing Cyborg to a one-fight contract to face Nunes again:

“Sure (I would do a one-fight deal). She doesn’t want to fight Amanda Nunes. Period. End of story. She wouldn’t be a free agent (if she won). She’d have the belt and there’s a clause that goes along with the belt. So it wouldn’t really be a (one-fight deal).”

What do you think about White willing to ink Cyborg to a one-fight deal to rematch Nunes?